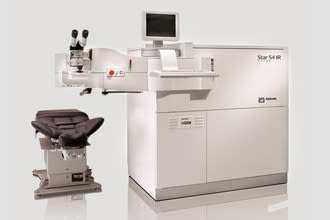 LASIK and other forms of laser refractive surgery, such as PRK and LASEK, all use a highly specialized excimer laser to reshape the cornea and correct refractive errors including myopia (nearsightedness), hyperopia (farsightedness) and astigmatism.

Excimer lasers have revolutionized the field of laser eye surgery. And over the decades, advances in excimer laser technology have increased the safety, efficacy and predictability of corneal refractive surgery.

Excimer lasers have the ability to remove, or "ablate," microscopic amounts of tissue from the cornea with a very high degree of accuracy and without damaging the surrounding corneal tissue.

There are several excimer lasers that have been approved by the FDA for use in vision correction surgery performed in the United States, including:

Though each of these lasers has its own unique set of features, research has shown that all FDA-approved excimer laser produce comparable LASIK results.

Most experts agree that your surgeon's skill and experience, and an accurate evaluation of whether you're a suitable LASIK candidate, are far more critical factors affecting final LASIK outcomes than subtle differences between excimer lasers.

How do excimer lasers work?

The excimer laser emits a cool beam of ultraviolet light of a specific wavelength (typically 193 nanometers) to precisely remove corneal tissue. When the surface of the cornea is reshaped in the right way, it allows light rays to focus properly onto the retina for clear vision.

The high-energy pulses of ultraviolet light penetrate only a tiny amount of the cornea and have the ability to remove as little as 0.25 microns of tissue at a time. (One micron is a thousandth of a millimeter.)

Excimer lasers are controlled by computer settings programmed to correct your specific refractive error. Your surgeon will program the excimer laser with the desired measurements in order to reshape your cornea and treat your prescription. The quantity and pattern of tissue removal are unique to each patient.

Most modern excimer lasers have automated eye-tracking systems that monitor eye movements and keep the laser beam on target during surgery. Studies have shown that eye trackers produce better outcomes and decrease LASIK complications compared with past lasers that did not use eye-tracking systems.

In recent years, increasing evidence has indicated that larger pupil sizes may affect laser vision correction outcomes. If your pupil expands in low light beyond the diameter of the laser treatment zone on the cornea, you may experience vision problems such as glare and halos at night.

Some surgeons believe the diameter of the laser ablation should be at least as large as your pupil in dim light. If you have larger pupils, the type of excimer laser may be important in relation to how large the treatment zone (diameter) the laser is capable of creating. You should discuss this with your surgeon.

Treatment times also differ among lasers, ranging from about 20 to 60 seconds or longer, depending on your refractive error. You may consider that important in terms of your comfort as you undergo a procedure.

You also might want to ask whether your surgeon uses a femtosecond laser or a bladed surgical tool (microkeratome) to create the corneal flap in LASIK eye surgery and how these two approaches might differ in terms of your comfort. Many surgeons take opposing sides in the microkeratome vs. femtosecond LASIK debate.

While specific excimer laser technology plays a key role, ultimately it is your surgeon's skill and experience — and your suitability as a candidate — that will be the most important factors affecting your LASIK outcome.