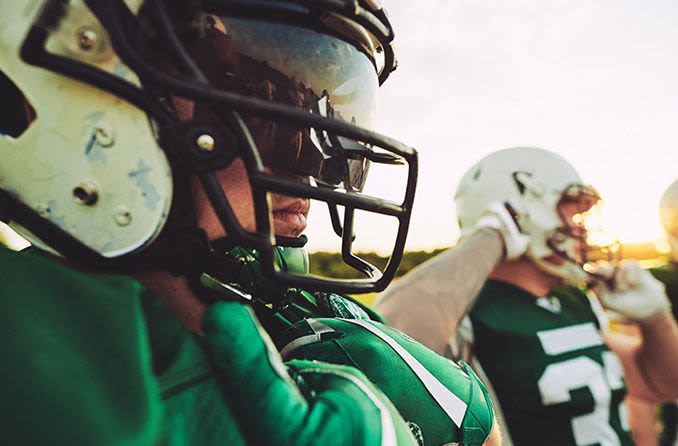 With new visors, NFL players should be able to better manage light and see colors on the football field.

You might even say that NFL players are stepping up their eyewear game.

“We can filter light in a way to leverage your natural visual acuity,” Chumbley says. “So we see colors — red, green and blue — naturally.

“If you can heighten your sensitivity in areas, it can create a lot of color contrast, which creates a better depth perception scenario for you,” he adds. “So, with Prizm Clear, what we’re doing is we’re eliminating areas of color confusion.”

Nana-Yaw Asamoah, the NFL’s vice president of business development, told Forbes.com that the pink tint of the Oakley shields will “still allow the general consumer, the referee, our trainers and health care providers on the field to be able to see into players’ eyes.”

Only Oakley shields, with exceptions

After successful testing in the 2019 Pro Bowl, the league decided to allow players to equip their helmets with the lightly tinted Prizm Clear visors in the 2019 season. Unless a player obtains special approval from the NFL, the only shields allowed on the field are the Oakley visors.

To tint or not to tint

Clear shields have been allowed in the past, but the NFL banned dark-tinted visors in 1998, approving them only for medical reasons, according to Sports Illustrated. Fourteen players received medical exemptions during the 2018 season.

“We haven’t seen tinted visors meet regulation standards in sports like football because, although they may seem practical, it may be harder to check the face or the eyes quickly through the visor, or factors like weather may cause the visor to fog up,” said Dr. Kathy Weise, a professor at the University of Alabama at Birmingham School of Optometry.

NFL player visors in the news

Even with allowances for Oakley Prizm Clear Shields and those approved for medical reasons, visors are still stirring up trouble in the NFL.

Cleveland Browns wide receiver Odell Beckham Jr. was yanked from a Sept. 16 game because his helmet visor didn’t adhere to NFL standards, according to CBS Sports. Beckham complained that he was unfairly singled out.

Less than two weeks later, news surfaced that New York Jets safety Rontez Miles had filed a lawsuit claiming an NFL referee demanded in 2017 that he remove the visor he’s worn for medical reasons throughout his pro career.

Miles alleges the lack of a visor led to a broken bone in his right eye.

What are performance sunglasses?

Why you should consider Oakley glasses