The importance of braille: What it is and how it’s used 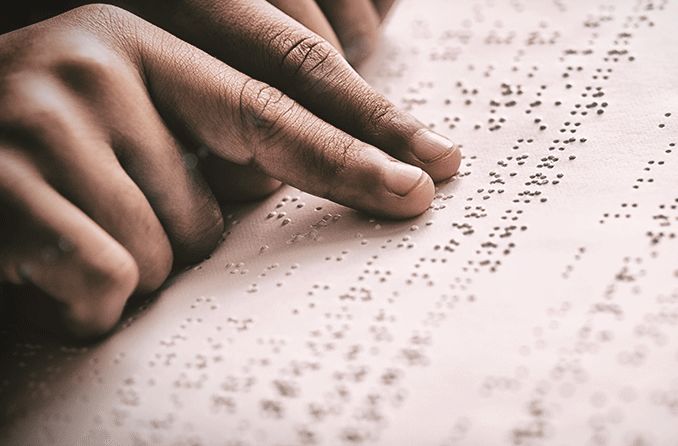 Have you ever seen the raised dots on bathroom signs or elevator numbers and wondered what they were? These raised dots are braille, a writing system that allows people to use their sense of touch to read words and numbers. Braille is used by people who are considered blind or who have low vision.

Braille is composed of 6-dot cells that have 2 columns and 3 rows. These cells use different patterns to convey certain letters or punctuation. A single dot or pattern of dots may be raised in any of the 6 positions. There are 64 possible combinations of English braille.

Braille takes up more space than print, so standalone books or novels that are long in print can often come in a large number of volumes when transcribed to braille. Here are a couple of examples:

How is braille used?

A common misconception about braille is that it is its own language. This is not true. Rather, braille is a writing system that has its own versions in many other languages besides English. There are even different forms of braille in English for music, math and computer science that follow their own unique rules.

In everyday life, braille is used to annotate public signs like bathroom placards. Refreshable braille displays can be connected to computers to transcribe words into braille of up to 80 characters at a time. There are also braille printers and braille keyboards to assist with online navigation.

READ MORE: How to make the internet easier to navigate with impaired vision

How is braille written?

There are three grades (types) of braille writing. They vary in rules, difficulty and general writing techniques.

This style of braille writing is the most simple. For grade 1 braille, letters are substituted with their braille counterparts one by one. This is a form of transcribing. Grade 1 braille in English consists of 26 alphabetical letters, as well as punctuation.

Grade 2 braille is known as the “literary code.” It utilizes contractions for certain commonly used words, like “but” and “very.” The purpose of these contractions is to optimize the process of reading and writing braille since going letter by letter can be time-consuming. Grace 2 English braille consists of the 26 alphabet letters, along with punctuation and at least 50 contractions.

This is the most common type of braille that is used. It is observed in most books, printed menus and public signs.

This form of braille writing uses shorthand to fit entire words or phrases into a single or small string of characters. Grade 3 builds on the rules established in grade 2. However, many of the shorthands used in grade 3 braille are not standardized. This grade of braille is the leased used form.

The creation of braille

The first incarnation of braille dates back to an early concept called “night writing.” Charles Barbier, a French native, invented many different forms of alternative writing that were published in a book in 1815. Night writing was the name given to the tactile system he developed using raised dots in 12-dot cells.

Braille as we know it today was created by Louis Braille. Inspired by Charles Barbier’s night writing system, Louis Braille took the 12-dot setup and streamlined it to 6-dot cells that can correlate with many letters, words and numbers.

Louis Braille was a student at France’s Royal Institute for Blind Youth when he began his work with braille. He spent at least nine years developing the system and worked throughout his life to refine and improve it. Unfortunately, he was never able to see the success of braille in his own lifetime.

Braille’s impact on the blind and low vision community

Many things have changed since the creation of braille. With audio resources being much more available to those with blindness and low vision, some might wonder how relevant braille is in today’s world.

While braille literacy has gone down in the last few decades, it is still used in many places and is a cornerstone for blind literacy. Events like the Braille Challenge help maintain interest in the writing system for students throughout the United States and Canada. When paired with audio assisting devices, braille helps thousands of people navigate through the sight-centric world each day.

READ NEXT: A typeface designed specifically for low-vision readers

Harry Potter and the Order of the Phoenix. Future Aids: The Braille Superstore. Accessed March 2022.

What is braille? American Foundation for the Blind. Accessed March 2022.

Braille — What is it? What does it mean to the blind? The World Under My Fingers:

Personal Reflections on Braille. National Federation of the Blind. Winter 1996.

The braille literacy crisis in America. National Federation of the Blind. March 2009.

Resource Guide for the Legally Blind

Yes, You Can Travel If You’re Blind or Have Low Vision