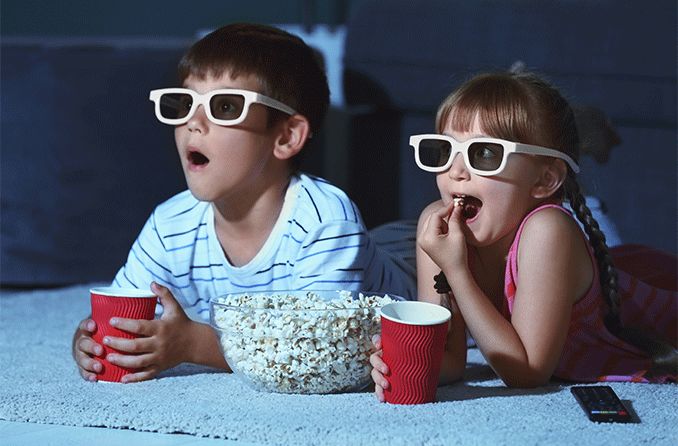 Watching movies or videos in 3D means that you, the viewer, are seeing images across three dimensions — that is, if you’re wearing 3D glasses.

Specialty glasses give 3D movies an appearance of height, width and depth (three dimensions) for a more immersive viewing experience. This enhanced depth perception makes images seem more lifelike. You may even feel at times as if the images you’re seeing are leaping from the screen!

Many of today’s blockbuster movies are filmed specifically for release in 3D format. That means that, whether you visit a movie theater or watch these 3D flicks from home, you’re going to need these glasses.

Knowing more about the technology — plus, where to buy it — will help you choose the right 3D viewing glasses for you.

What are 3D glasses, and how do they work?

Normally, images in movies, television and videos are seen in two dimensions (height and width), but that may feel limited. That’s where 3D technology comes in.

Then, when a 3D image is transmitted to the screen, it sends information to the left eye and right eye separately. These images overlap on the screen. The result is a slightly blurred image that can be decoded with special glasses.

The left and right lenses of 3D glasses have different functions, tricking the brain to work this out to perceive these two images as one. The final result is a 3D image in our brain.

Choosing the best 3D viewing glasses for you will depend on a number of factors, including the type of television you have and how much you want to spend. Because their lenses filter light differently, it’s important to consider how each type below suits various viewing scenarios.

The oldest type of these devices, anaglyph 3D glasses are recognizable by their red and blue lenses. Their frames are sually made from cardboard or paper, and their lenses work by filtering out the red and blue light individually.

Each eye sees a slightly different image. The red lens helps the eye to perceive red as “white” and blue as “black,” while the reverse is true for the blue lens. This tricks the brain into seeing the two images as a single image that has three dimensions (including depth).

The main advantage of this type is low cost. Others include:

Meanwhile, they’re generally pretty flimsy in construction, which can be a distinct disadvantage.

Polarized 3D glasses are the kind typically used in modern movie theaters. They have darkened lenses, and their frames are usually made from plastic or cardboard.

Much like polarized sunglasses, these 3D glasses restrict the amount of light entering your eyes — one lens allows vertical rays of light into your eye, while the other allows in horizontal rays, thus creating a sense of depth (the 3D effect).

Movies meant to be used with these glasses are projected with two superimposed images at the same time. The screen has the same filter type as the glasses, and the two work together to enable you to see the two images simultaneously.

This technology is known as passive 3D technology and works on any TV with passive 3D capabilities. Some advantages of polarized 3D glasses include:

These lenses have some downsides as well, such as:

This option is more sophisticated, thanks to added electronic components  — though this means shutter 3D glasses will require batteries or recharging between uses.

Shutter 3D glasses are more costly, but the quality of the picture is far better. You need to have a plasma TV with 3D capabilities for the shutter type to work.

This technology has certain advantages, including:

With all of the pros and cons in mind, you may wonder if these devices are worth the expense or inconvenience, asking yourself, “Can I watch 3D movies without 3D glasses?”

The short answer is yes. But because of the way they’re filmed and projected, 3D movies will look blurred if you watch without the special glasses. Watching this way may result is eye strain — and, while it’s temporary, that is not worth it to many people.

Active 3D glasses are too expensive for theaters, so most movie cinemas do not use active technology. Active 3D is only really suitable for home theaters.

You can bring your free movie theatre glasses home with you, but it means that you will only be able to watch the movies at home with a passive 3D TV. They won’t work on your active TV.

Other uses for 3D tech

Are 3D glasses only for use in movies and videos? While entertainment is the main reason to have 3D viewing glasses, the answer is that they can also be useful elsewhere.

For instance, surgeons today are using 3D technology during microsurgery. A 3D image projected onto a screen enables them to work in a “heads-up'' position while operating instead of bending over microscopes. This prevents enormous physical strain and allows them to work longer hours.

Various warnings appear on the packaging of gaming systems and televisions about the possible hazards of watching 3D images on the screen — these include headaches, dizziness and nausea. However, these are generally short-term effects. Once the viewer stops watching, these effects should disappear.

According to the Optometry Center for Vision Therapy, some people simply aren’t able to process or interpret the optical illusion that these special glasses are supposed to create, leading to headaches, nausea and other issues. The concern for these people is that extended use of 3D technology can damage their eyes, particularly if they already have eyesight problems.

This technology may be problematic for children who spend a lot of time looking at screens with 3D imagery. But while there is not enough research to suggest that this activity is affecting eye health, it is perhaps a good idea to limit your child’s viewing time.

Can I get 3D prescription glasses?

In 2010, leading eyewear manufacturer Luxottica announced they were launching the first-ever 3D prescription glasses through their Oakley brand. Oakley has since produced a range of innovative 3D glasses — but keep in mind, not all of these are prescription-based.

If you’d like to try such glasses with your prescription, check with your eye care provider to discuss options.

Where can I buy 3D glasses?

Any store that sells TVs with 3D capabilities should have a range of special viewing glasses available (or the ability to recommend a suitable source). Alternatively, many online retailers also sell them.

You may find that the technology differs from one supplier to the next, but, for the most part, 3D viewing glasses should work across any make of television, particularly the newer models.

Whether you’re shopping in person or online, consider Oakley. They’re an industry leader and have been making quality 3D-specific eyewear since 2011.

The first Oakley 3D model offered a better optical quality than what you’d get using movie theater glasses, with superior color (thanks to gray tinted lenses), minimal “ghosting” and slightly curved lenses that enhanced the 3D effect. Overall, they were brighter with more saturated colors and crisper detail.

Oakley went on to team up with Paramount Pictures and Hasbro, producing a pair with custom graphics for the debut of 3D flick “Transformers: Dark of the Moon.” Meanwhile, the company was also improving on their state-of-the-art 3D Gascan model. Today, they produce many versions of both, with names like “Gascan Polished White,” “TINTIN Rootbeer” and “The Hobbit.”

And as a testament to Oakley quality, many TV manufacturers offer Oakley brand glasses to pair with their 3D TV models.

If you don’t want to buy them, you can make 3D glasses using templates you can find on the internet. Bear in mind that most commercial types can fit over your standard prescription glasses, while homemade glasses might not.

To make red and blue anaglyph glasses, first get plastic or cellophane transparency sheets for overhead projectors or acetate sheets available from hobby stores. Measure and cut out the lenses' shape, and color one lens blue and one lens red. Then stick them into your frames. There are templates available on the internet with instructions for making frames. Otherwise, use an old pair of frames with the original 3D lenses removed. The red lens goes on the right side of your frames, and the blue lens belongs on the left.

Ultimately, whether you’re ready to head off to your closest TV retailer for the latest in 3D technology with a suitable pair of 3D glasses to match, or you want to give homemade glasses a try, you can relax knowing there are no real long-term effects on your eyes.

So sit back and enjoy the sensation of enhanced depth perception— 3D is here to stay.

Spy glasses: All you need to know

Specialty eyewear: Glasses for all seasons, for all reasons

MLG glasses: Why they’re the perfect choice for meme lovers