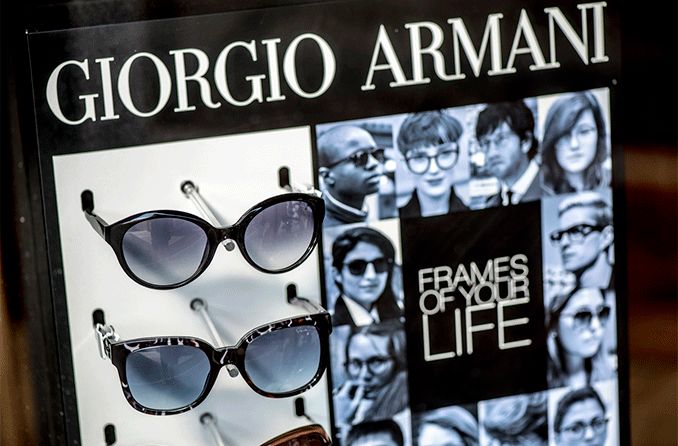 What do Adrian Grenier, Brad Pitt, Katie Holmes and Sarah Jessica Parker all have in common, aside from star status and impeccable style? All have been spotted wearing Giorgio Armani sunglasses.

The Italian fashion designer Giorgio Armani has been dressing celebrities for decades. So stars naturally reach for Armani eyewear, whether showing off a flashy new convertible or trying to steer clear of paparazzi while grabbing coffee.

But Giorgio Armani isn’t just for celebrities. Read on to learn a little history of the Giorgio Armani brand, check out popular eyewear styles and find out where to buy Armani eyewear.

There are three main ingredients in Giorgio Armani’s “recipe for success”: determination, vision and “a fiercely uncompromising stance.”

Unlike many high fashion designers, Giorgio Armani did not grow up in or receive traditional training in the fashion industry. Equipped only with a natural talent for aesthetics, Armani “learned everything from scratch while working.”

How? In 1957, a young Giorgio Armani got hired to dress windows at a department store in Milan, Italy. He was promoted and eventually became an assistant buyer for the store. Through “chance encounters” with creatives, designers and entrepreneurs, Armani decided to become a fashion designer.

In 1975, he launched the Giorgio Armani label, and his company grew into three major brands: the flagship Giorgio Armani brand and two aimed at younger customers: Armani Exchange and Emporio Armani.

The Giorgio Armani brand has become known for “elegant, sophisticated” power suits for men and women. Armani transformed suits from “stuffy” to relaxed with unlined jackets and loose lines.

The Italian designer has won many awards over the years. And in 2019, he received the prestigious Outstanding Achievement Award from the British Fashion Council for his contribution to the global fashion industry.

The Armani Group has a deal with global eyewear company EssilorLuxottica to create eyewear for the Giorgio Armani brand as well as for the Emporio Armani and Armani Exchange brands.

Armani’s interpretation of creative design is not intended only to “turn heads,” but to leave an impression.

The signature elements of the Giorgio Armani style include:

These “elemental concepts” of design can be seen in all Giorgio Armani fashion, including the eyewear that bears the logo of the famous designer.

Giorgio Armani name-brand sunglasses are made from quality materials, including acetate and metal, and many feature the Giorgio Armani logo.

They’re made in Italy with ultrathin titanium frames and solid-color lenses. They come in various color combinations, including gray frames with blue lenses and matte gold frames with brown lenses.

Some other top Giorgio Armani sunglasses styles you may want to consider include:

Giorgio Armani produces designer sunglasses in a selection wide enough that you should have no trouble finding a pair to suit your style.

Giorgio Armani Italian optical frames for men and women are available through a wide selection of retailers both online and in-store. The Giorgio Armani Icon style available in sunglasses is also offered as eyeglasses.

Giorgio Armani eyeglasses come in an impressive array of colors, including:

Giorgio Armani glasses frames are also available in several shapes, including round, square, panthos, pillow and rectangle, in plastic or metal. You can add prescription lenses at an optical shop, though you’ll need to make sure the Armani eyeglasses you choose are suitable for your prescription, especially if you have a strong prescription or use progressive lenses.

Where to buy Giorgio Armani eyewear

As Hollywood knows, a pair of Giorgio Armani sunglasses or glasses can take even the most basic outfit up a level or three. If you want high-quality eyewear that will give you an instant style boost, Armani may be the brand for you.

BVLGARI: History, eyewear styles and where to buy

Everything you need to know about Chanel sunglasses