Home Glasses | What do your glasses say about you?

What does the shape of your glasses say about you? 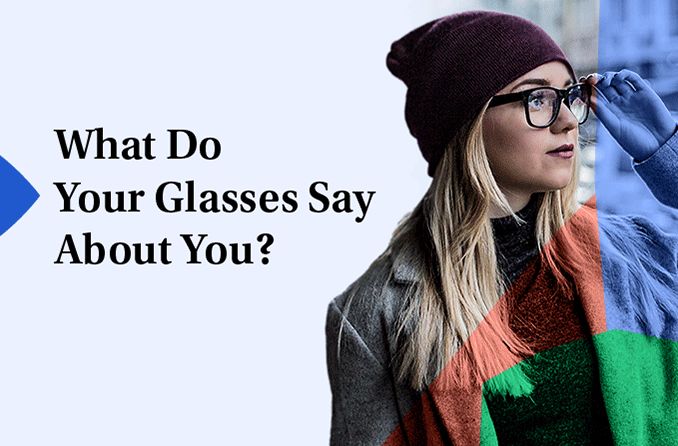 There’s more to your frames than meets the eye

Glasses have one purpose and one purpose only: to help you see better — right? Well, maybe not. These days, they can reflect more than just UV light. According to our study, they might even have the potential to make or break your next date or interview.

To learn more about which types of eyewear can do you the most favors, we explored how people perceive others who wear various kinds of glasses. We uncovered illuminating insights about the importance of frame shape and color from our sample size of 862 survey respondents, including 207 hiring managers. Which are the most popular and the most attractive glasses? Could wearing a particular style benefit you during a job interview? Read on to find out.

The most attractive frames

While the purpose of glasses is to help you see better, they can also help you look better. Let’s see what kind of frames men and women most want to see on their romantic partners.

From our female respondents’ perspective, nearly a quarter thought rectangular frames were the most attractive on a partner. In second place were square frames, agreed on by more than 15% of women. Rectangular frames were also the most appealing to men; clearly, boxier frames are quite alluring these days. But square frames ranked third among men since feminine cat-eye frames claimed second place on their attractiveness scale. Men and women shared the same four out of five top choices for their partner, while oval and cat-eye frames were the only gender-specific preferences.

What about the people who are looking for love? When asked about their dating app usage and tendencies, about 68% said they would be more likely to swipe right if the person on their screen was wearing glasses. Three-quarters of men said it would positively influence their swipe decision, whereas just 58% of women agreed. But some frames might elicit a better response than others: Men found oversized frames the least attractive, while women felt that way about thick-rimmed ones.

So, if you wear glasses and are using dating apps, switching to a boxy or cat-eye frame shape may be a good idea. Finding one that compliments your face shape and skin tone might improve your chances even more.

The most popular frames

We know which kinds of frames people think are the most attractive, but which frames and colors do people prefer for themselves? Spoiler alert: Yet again, boxy frames were a winner here.

Overall, rectangular frames were people’s top choice, while square frames were only slightly less popular. Almost half of the respondents preferred glasses with black frames; they were more coveted than the second choice (blue) by a whopping 25 percentage points. However, we also found these leanings varied by gender and generation.

Men gravitated more toward aviators and metal frames, while women liked cat-eye and plastic ones better. Gen Z was more than six times more likely than baby boomers to opt for geometric frames, and millennials were twice as likely as Gen Z to choose clear frames. No matter your age or gender, the number of frame options can feel overwhelming, but at least it’s possible to find affordable frames that fit any style.

We now know that certain frames can enhance your attractiveness, but they might also say something about your personality. How do glasses affect people’s perception of you?

Aviators correlated with many different personality types. Out of the nine traits associated with them, most were quite positive — charismatic, happy, kind, romantic and trustworthy all represent desirable characteristics of aviator wearers. Unfortunately, some respondents felt that aviator-shaped glasses could make you seem like an angry tool.

People who wear oval glasses also might want to rethink their frame choice, as they were  associated with depression, laziness and sadness. However, square glasses got near-perfect reviews, as respondents most often linked them to being affectionate, cool, friendly and reliable. Cat-eye glasses were associated with being intelligent, rectangle frames were sexy and thick-rimmed ones looked adventurous. Keep those associations in mind next time you decide to update your specs!

Hireability based on your eyewear

Some frames make you more alluring, while others might make you look like a creeper. But which ones give you the best chance at landing a job?

If you want to look professional, rectangular glasses might be your best bet, according to 42.2% of hiring managers. Our next best suggestion is browline glasses, based on 19.1% of responses. Creators aptly named these frames, as they only cover the upper portion of the glasses and accentuate the browline. They’re a bold yet versatile choice and especially flattering for square-shaped faces.

Regarding frames that made people look confident, rectangular and browline were once again the top choices. This time, they tied for first place, with two in five respondents voting for each type. Hiring managers must have been particularly fond of browline frames, though: 84% said candidates wearing them would be the most likely to get hired.

Meanwhile, showing up to an interview wearing aviators isn’t a great idea since more than half of managers said these frames would hinder someone’s chances of getting the job. Some even noted that wearing no glasses would be better than wearing oversized or aviator frames.

Your choice of eyewear can impact your personal life and professional life more than you might expect. Boxier frames can help you get noticed on dating apps, while aviator or oval glasses might not do you any favors. You could go for the most popular color choice (conservative yet timeless black) or go against the grain with the far less common look of a multi-colored pair. But maybe go with a classy rectangular or browline frame to look professional and confident for your next job interview. Depending on what you want to accomplish, it can’t hurt to have at least a couple of different options to choose from!

For this project, we surveyed 862 respondents between the ages of 18 and 77 to understand their perceptions of glasses. Respondents were 56% male and 44% female. In addition, we surveyed 207 hiring managers on the same topic. These respondents were aged 19 to 80; 38% were male, and 62% were female. We’ve taken steps to prevent and eliminate false survey responses, but in all cases, some results may be skewed due to telescoping, selective memory or lying.

About All About Vision

With over 20 years of expertise, All About Vision provides people with the most accurate, up-to-date information to make informed eye care and eyewear decisions.

Know someone with glasses who might get a kick out of our findings? Feel free to share this article with them. We just ask that you do so for non-commercial purposes only and that you provide a link back to this article page so our contributors can get credit for their work.

The Best Glasses for Your Face Shape and Skin Tone

What is my face shape? Use this guide to find out what glasses suit you

Infographic: What is my face shape?