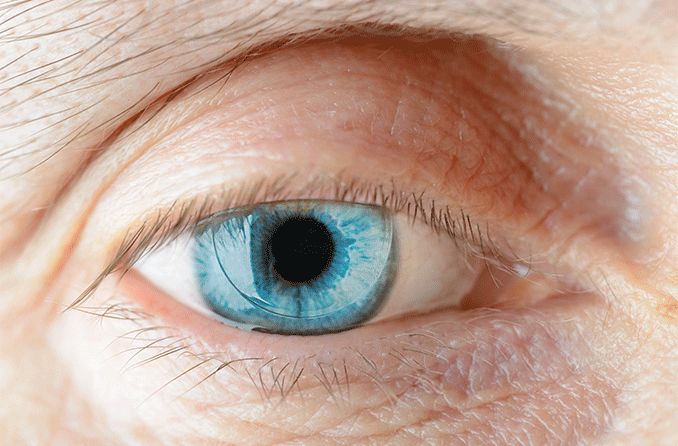 PMMA (polymethyl methacrylate) — better known as Plexiglas or acrylic — was once considered the best material for contact lenses. In fact, when the first mass-market contact lenses were developed in the 1940s, they were all made of this rigid, nonporous PMMA material.

These days, however, very few contact lens wearers will ever encounter lenses made of PMMA plastic. To understand why PMMA was once the primary material used for contact lenses — and why that is no longer the case — it’s important to know what it is and how it’s used.

PMMA refers to a synthetic resin — or plastic — that is created through the process of polymerization. In simple terms, this means that a source material (called methyl methacrylate) is placed into a mold in combination with a catalyst. This causes a chemical reaction. In the course of this, long and very stable chains of molecules form.

The resulting substance is transparent and has a low-density structure. In other words: It weighs very little. In fact, the PMMA structure is only about half as heavy as glass.  Unbeknownst to you, you’ve likely seen the benefit of that lightweight clarity, for example, if you’ve ever visited a public aquarium.

Large aquarium tanks can hold more than a million gallons of water — an immense weight that is held back from the viewer with a single window pane that needs to be strong enough to withstand the pressure from the weight of the water and what’s inside.

PMMA is superior to glass for this application because it’s transparent (92% of light passes through it) and very lightweight. An observation window made of PMMA is just as strong as glass and is less than half the weight, allowing visitors to safely marvel at the beauty of the underwater world, even if the window is very thick.

The discovery of PMMA

PMMA was first discovered in 1893. A few decades later, a former assistant pharmacist in Germany named Otto Röhn developed it into Plexiglas, one of the best-known plastics in history. It is strong, durable, inexpensive to produce, more scratch resistant than glass, sound resistant, easy to install and can be shaped into many forms — from sheets to blocks to small beads.

PMMA also doesn’t corrode and is resistant to ultraviolet rays. And, in thin layers, it can be used for waterproofing.

In short: PMMA has proven incredibly useful to builders and engineers and can be found everywhere, from cars and airplanes to skylights and hot tubs, as well as the clear barriers surrounding ice rinks that keep visitors from being hit by hockey pucks.

But how did PMMA become a popular material for contact lenses?

It all started with an eye injury

PMMA’s entry into medicine began in World War II with the unfortunate fate of a pilot in the British Royal Air Force named Gordon Cleaver. In the summer of 1940, when scrambling to board his plane for a mission, Cleaver forgot his goggles.

According to reports, Cleaver’s plane ran into machine-gun fire over the city of Winchester in the South of England. His aircraft burst into flames, its canopy shattered, and shards of the PMMA acrylic cover lodged themselves deep in Cleaver’s eyes. The young pilot managed to evacuate the plane and parachuted — burned and bleeding — to the ground.

The doctors couldn’t do anything about his right eye, as it was too badly damaged to save. But a London ophthalmologist named Harold Ridley performed 18 surgeries on Cleaver’s left eye and managed to save his sight.

While repairing Cleaver’s eye, Ridley noticed something odd: The splinters of the acrylic from the plane’s canopy that he pulled from the pilot’s eye had not caused any inflammation. His body just seemed to accept them and did not try to reject this foreign material, nor did the acrylic affect his sight.

This gave Ridley an idea. The doctor had been considering what could be used to craft artificial lenses for the eye: PMMA might do the trick.

PMMA has saved the eyesight of many people

At that point in history, contact lenses were not yet a big topic. Rather, what was on the minds of eye doctors like Ridley were cataracts. This clouding of the eyes occurs when proteins in the natural lens start to break down in older age. The process diminishes the sight the same way that fog or dust on the windshield of a car might do: Things start to look dull and blurry. Eventually, without treatment, the affected person loses their vision completely. In fact, cataracts is the most common cause of blindness in the world.

There’s only one way to get rid of cataracts: The lens must be removed. For thousands of years, doctors performed a technique called couching in which they pushed the affected lens out of the line of sight with the help of a needle-like tool. Then in 1747, French physician Jacques Daviel pioneered a new surgery in which he took out the clouded lens completely. This helped in the same way it might help to take out a soot-covered lens from a binocular. It allows more light to enter the eye, but your vision will be out of focus.

Dr. Ridley had already been thinking whether it might be possible to replace a clouded natural lens with a clear artificial one. On November 29, 1949, Ridley did his first test on a patient. At St. Thomas’ Hospital in London, he implanted an artificial lens crafted from PMMA into the eye of a cataract sufferer.

Since Ridley’s discovery, countless patients have had their eyesight restored with the help of artificial PMMA lenses. Lens replacement has become one of the most common surgeries performed on the eye. Every year, millions of these procedures are done around the globe. And lenses made of PMMA are still being used for cataract surgeries in some parts of the world today.

But there are other vision problems that also affect a large percentage of humanity: myopia (nearsightedness) and hyperopia (farsightedness). At the latest count, more than 1.4 billion people worldwide suffer from myopia alone. And it turned out that PMMA could help with these vision issues as well.

SEE RELATED: What is cataract surgery?

The same properties that made PMMA a great material for cataract replacement lenses also helped kick off the contact lens revolution.

These days, we’re so used to placing contact lenses into our eyes that we rarely pause to consider that this is an invasive act. We’re pressing down on the cornea (the clear front surface of the eye) with our finger and covering it with a foreign body: a contact lens.

Because PMMA material is inert — doctors refer to it as biocompatible — this does not trigger an immune response. PMMA also doesn’t shatter, is optically clear and can be molded so that it fits the curve of the eyeball. All of this made it safe to wear a PMMA lens on the eye. Decades of tests and experience have proven that again and again. And the polymer can be shaped in a way that corrects refractive errors, including myopia and hyperopia.

Why has PMMA fallen out of favor?

But for all its benefits, PMMA has its drawbacks. It’s a rigid material, which makes contact lenses that are crafted from it fairly stiff. This is why the hard contact lenses of the early days were infamous for being uncomfortable. New users often took weeks to adjust to them. Some never did.

In addition, the cornea needs oxygen to stay healthy. But PMMA acts like a plastic shield that keeps oxygen away from the eye. Contact lens makers reacted to this by designing PMMA lenses as small as possible to reduce the area they covered. They also shaped the lenses in such a way that there was a gap between them and the surface of the cornea. This made it easier for tear fluid to wash under the lens and flush the cornea with oxygen. However, it also meant that these lenses tended to fall out fairly easily, triggering panic-filled searches on rugs and in lawns.

Researchers started to look for alternatives. Over time, they developed new silicone-containing rigid contact lens materials that are gas permeable, meaning they allow oxygen to pass directly through the lens to reach the cornea. The new materials are also more flexible.

Although today’s “rigid gas permeable” lenses, or RGPs, are technically still considered hard contact lenses (as opposed to soft contact lenses, produced from gel-like, water-containing plastics called hydrogels), they can be made larger and can be fitted much closer to the cornea, making them significantly more comfortable than PMMA hard lenses.

The new gas permeable (GP) materials have pushed out PMMA. It’s been estimated that of the about 125 million people around the world who wear contact lenses, only about 1% wear lenses made of PMMA.

In cataract surgeries, too, PMMA has been mostly replaced by more flexible materials. Because these can be folded, doctors can now make much smaller incisions to insert intraocular lenses (IOLs) into the eyes during cataract surgery. This speeds up the healing process and reduces the risk that a patient develops astigmatism.

Is there still a future for PMMA?

If you do come across PMMA these days, it’s likely not at your eye doctor’s office but, rather, via shady advertisements with before-and-after pictures of phalloplasty — better known as PMMA penile enlargement.

You might also hear news stories like the one about a famous Brazilian doctor named Denis Cesar Barros Furtado. The self-described “Dr. Bumbum” made a habit of injecting PMMA into the buttocks of female patients looking to enlarge their rear ends. Furtado, who reportedly once had more than 600,000 followers on Instagram, was arrested in 2018 after a patient died following a procedure performed in Furtado’s apartment in Rio de Janeiro, during which the plastic surgeon administered unsafe amounts of PMMA injections into the woman’s buttocks.

Shady headlines aside, because PMMA has such a high degree of biocompatibility, it still plays a role in medicine. The polymer is used as bone cement to secure implants such as hip replacements. It can also be shaped to make dentures. And in cosmetic surgeries, it is injected under the skin as a filler to smooth out wrinkles or acne scars. Performed responsibly, these are generally safe procedures.

But in the world of contact lenses, times have changed. For a number of reasons, PMMA has been pushed to the sidelines. Yet, this polymer will always keep its spot on the honor roll of eyesight treatment — as the material that made the very first lens replacement surgeries and contact lenses a reality.

Scleral GP contact lenses: How these can help you