How eyeglasses work and a history of glasses 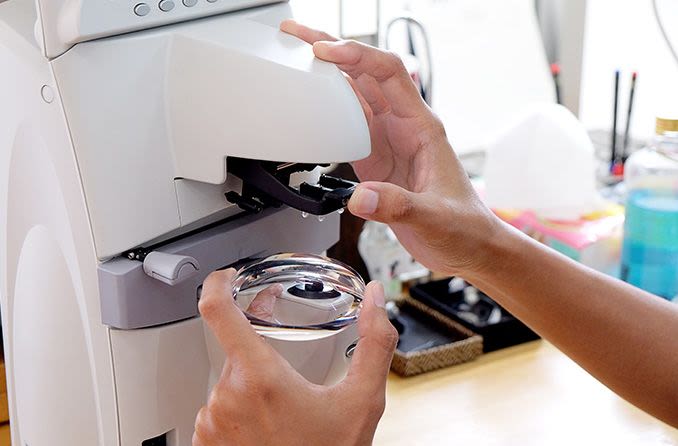 The sight of eyeglasses on our family, friends and co-workers is so common today that it’s easy to underappreciate the life-changing role that this simple, vision-correcting technology plays in our daily well-being.

How do glasses work?

The ancient Romans were first to discover that by employing pieces of glass to change the refraction of light, they were able to read small print more clearly, inventing the magnifying glass in the process.

Refraction is the term given to how light slows and bends when it passes from a light-density medium such as air into the thicker density of transparent glass or plastic. We can observe the dynamics of refraction most clearly by dipping a pencil into water and observing how it no longer appears straight.

How our eyes see

Our earliest optometric pioneers discovered that how light bends as it enters the eye is key to how well we see.

To further complicate the vision challenge, light must pass through the pupil and the curved transparent outer surface of the eye called the cornea, which together shrink and curve incoming images to focus them onto the eye’s back surface, the retina, which is also curved.

Our brain sees what our retinas receive.

If your pupil and cornea adjust all incoming light to focus clearly on your curved retina backscreen, you enjoy perfect vision. However, if the projector boys focus your views in front of your curved retina screen, your distance vision will be impaired, a condition we call nearsighted or myopia.

Conversely, if your projection team focuses your views behind the retina, items close to you will appear indistinct, a condition that’s called farsighted or hyperopia.

And if the cornea itself is misshaped, it can blur our vision by forming a second focal point, a condition we call astigmatism.

This is where eyeglasses enter – and alter – the picture.

LOOKING FOR YOUR OWN PAIR OF EYEGLASSES? Find an eyewear store near you.

The history of eyeglasses

Back in the 13th century, Italian glassblowers discovered that they could create crude glass lenses of different thicknesses that would add or subtract from the eye’s focusing power to compensate for these vision problems.

As they came to understand the physics behind flawed vision, three types of handblown lenses evolved:

The earliest glasses, used primarily by monks, were either handheld or perched on the nose. But as the popularity of these lenses grew throughout the Renaissance, stabilizing extensions fashioned from wood, leather or animal bones were added to rest the lenses on the ears, resulting in the hands-free eyeglass framework we know today.

Bifocals and other spectacles

In the 18th century, U.S. founding father Benjamin Franklin cut two different lenses in half and pieced them together to invent the bifocal, a one-pair solution for those with both near- and far-sighted vision impairments.

This era also ushered in the pince-nez spectacles, which had no ear pieces but instead stayed in place via a nose clip; the scissors spectacles, which folded on a hinge for quick storage in a shirt pocket or vest; and cylindrical lenses, which curve asymmetrically to address astigmatism.

Glasses as fashion accessories exploded in the 20th century as the industrial revolution ushered in the use of strong plastics that could be molded into a wide variety of shapes, sizes and colors.

Speaking of colors, sunglasses became the rage midcentury as a protectant against the sun’s glare and UV rays.

By the 1980s, eyeglasses jumped their own nickname with the introduction of plastic lenses, making both glasses and sunglasses lighter and less breakable than their glass-lens predecessors.

The innovations to eyeglasses brought about by plastics proved especially helpful for children, who benefited from the shatterproof, scratch-resistant lens coatings; spring-loaded frames; silicone nose pads that stay in place; and wraparound earpieces that hold the glasses in place.

People who suffer from presbyopia, for instance, can’t see things clearly up-close because their outer eyes (the projector boys) lack the elasticity to adjust the curve of the incoming light.

Many of those with presbyopia now benefit from multifocal or progressive lenses, which can correct for near, far and middle distances in one lens.

Prescription sunglasses have also taken off, allowing athletes, sports watchers and outdoors enthusiasts the dual benefit of clear vision while protecting their eyes from glare and harmful UV rays.

AR and other smart glasses

Recently, eyeglasses have been augmented to display and store computer images with the introduction of smart glasses. Where once the sole goal of glasses was to correct blurred vision, smart glasses ironically now intrude on those crystal-clear lenses to display information generated by a mini-computer built right into the eyeglass frames.

That said, the developers of what’s been termed augmented reality or AR glasses were smart enough to scale down the computer data displayed in much the same fashion as the news scroll on our TV screens, so that users need not sacrifice clear vision to access their online data.

Smart glasses are redefining the quest for perfect vision by making a convenient display of things that otherwise might distract our sight at our peril, such as navigational maps, health metrics and even emergency phone calls and text messages.

While consumers are warming to this latest innovation, just as they did to smart watches and wearable fitness devices, smart glasses are proving especially popular in work environments as a solution to the incoming personal calls and handwritten notes that interrupt and delay meetings and presentations.

For some companies, the display of data via smart glasses has already replaced both the chalkboard and video conferencing.

The future of eyeglasses

What other eye-opening innovations might science and technology have in store for the spectacle wearers among us? Whatever lies ahead, rest assured that your projector boys will be first to screen it.

READ NEXT: How long do glasses take to make?

How long do glasses take to make?

How long does it take to adjust to new glasses?