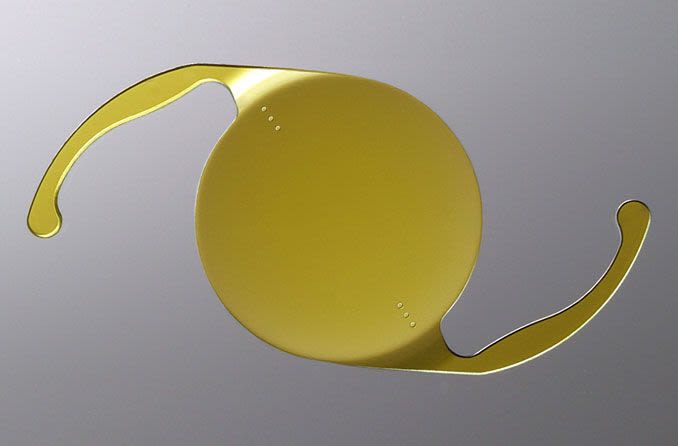 Most people with cataracts want not only to have clear vision after cataract surgery, but freedom from eyeglasses as well.

One thing that can prevent that from happening is residual astigmatism after surgery.

Astigmatism is very common before and after cataract surgery. Almost one in three people who are candidates for cataract surgery in the United States have at least 1.0 diopter (D) of astigmatism, which is enough to cause noticeably blurred vision without eyeglasses or contact lenses.

One study of refractive errors found that 29 percent of the U.S. population has between 1.0 and 2.0 D of astigmatism, 6.5 percent has between 2.0 and 3.0 D, and 2.2 percent has at least 3.0 D. These findings suggest nearly four out of 10 Americans have a significant amount of astigmatism.

Like toric soft contact lenses for astigmatism, toric IOLs have different powers in different meridians of the lens to correct the asymmetric power of the eye that is characteristic of astigmatism.

Prior to surgery, measurements are taken to enable cataract surgeons to choose the most beneficial toric IOL power and the required orientation of the implant in the eye to correct the astigmatism successfully.

Use of a toric IOL during cataract surgery does not increase the risk of common cataract surgery complications, but a misaligned toric IOL can cause blurred vision that cannot easily be corrected with eyeglasses or contact lenses.

One study found that 94 percent of astigmatic eyes treated with toric lens implants had 0.50 D or less astigmatism and 98 percent had 0.75 D or less residual astigmatism after surgery, enabling people to see acceptably well without glasses or contact lenses.

One reason that more people aren't opting for toric lens implants to reduce astigmatism after cataract surgery is the added cost of toric IOLs.

Though cataract surgery usually is fully covered by Medicare and all other medical insurance plans, the added costs associated with premium lens implants such as toric IOLs are an out-of-pocket expense that is the patient's responsibility.

If you choose a toric IOL to correct your astigmatism with cataract surgery, you can expect to pay an average of $1,310 per eye, according to a 2015 survey of U.S. eye surgeons by a leading industry analyst. By comparison, an LRI procedure to correct astigmatism will cost you an average of $584 per eye. Another option — arc-shaped incisions with a femtosecond laser (a modern, automated LRI-like astigmatism correction procedure) — has an average price of $1,136 per eye.

Another factor of why the use of toric IOLs is not as prevalent as it could be is that properly implanting a toric IOL is more challenging for cataract surgeons than using a conventional (spherical) IOL that's not designed for astigmatism correction surgery.

If you have astigmatism and need cataract surgery, ask your eye doctor to refer you to a cataract surgeon who embraces the latest surgical technology, including toric IOLs.

During your consultation prior to surgery, your surgeon will discuss with you the best options for your particular needs so you can be less dependent on eyeglasses after your cataracts are removed.