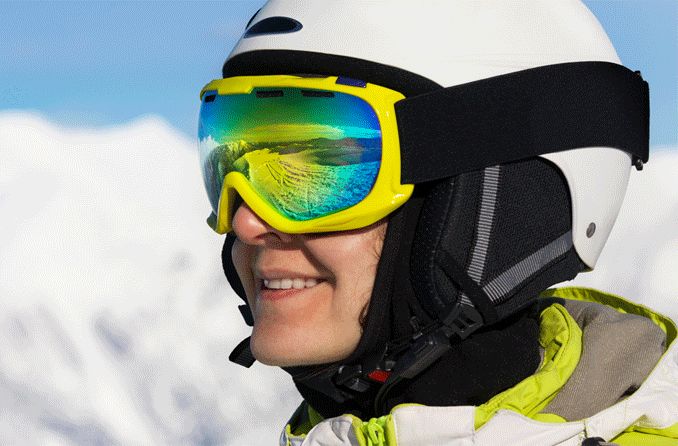 Snowblind — it's a frightening word. Thankfully, it's a condition that is totally preventable.

Snow blindness is a painful, temporary loss of vision due to overexposure to the sun's UV rays. The medical term for snow blindness is photokeratitis ("photo" = light; "keratitis" = inflammation of the cornea).

Though photokeratitis is commonly called snow blindness, the condition can (and often does) occur in the absence of snow.

The terms "snowblind" and "snow blindness" have become popular because snow is highly reflective of ultraviolet radiation. In fact, snow can reflect more than 80 percent of the UV rays that fall upon it. Also, skiing, mountain climbing and snowboarding usually take place at relatively high altitudes, where the sun's UV rays are stronger. Combined, these factors can double your risk of getting sunburned eyes, compared with being outdoors at lower altitudes in the summertime. 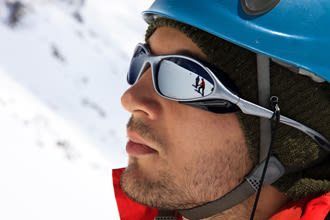 To prevent snow blindness on the slopes, wear sunglasses with a close-fitting, wrap-style frame or snow goggles. Make sure the lenses block 100 percent of UV rays.

But water and white sand also are highly reflective of the sun's UV rays and increase the risk of snow blindness.

Television journalist Anderson Cooper experienced snow-free snow blindness first-hand a few years ago when he spent a couple hours on a boat in Portugal without sunglasses and ended up "blind for 36 hours," according to his report of the incident.

After the day in the sun, he woke up in the middle of the night with symptoms of burning eyes and a feeling there was sand or grit in his eyes. "It turns out I...sunburned my eyeballs," he said on his television show, Anderson Live. "I had no idea you could do this."

Not only can you become snowblind without snow — it can happen without sunlight, too! Photokeratitis sometimes occurs from man-made sources of ultraviolet radiation, such as a welder's torch. Though this type of injury usually is called a "welder's flash" or "flash burn" of the cornea, the mechanism of action and symptoms are very much the same as those of snow blindness.

Sun lamps and tanning booths also can cause photokeratitis and temporary "snow" blindness if proper eye protection is not used.

Anderson Cooper's symptoms were typical of a person suffering from snow blindness, including the fact that they occurred (or worsened significantly) a few hours after the UV exposure took place — just like the delayed symptoms of sunburned skin.

Vision loss from snow blindness is temporary and typically resolves in 24 to 48 hours. Though snow blindness doesn't cause actual blindness, vision can be significantly impaired, making it unsafe to drive. Color vision also may be affected temporarily while you are snowblind.

How Do You Treat Snow Blindness?

The symptoms of snow blindness typically resolve on their own within a day or two without medical treatment.

If you wear contact lenses, you should remove them immediately and refrain from wearing them again until your eyes return to normal.

To relieve pain or discomfort from snow blindness, stay indoors and wear sunglasses. Keep your eyes well-moistened with artificial tears. Choose preservative-free formulations for mild dry eyes to prevent a sensitivity reaction from preservatives or worsened blurred vision from drops that are too thick.

For additional relief, use over-the-counter pain relievers, being careful not to exceed the recommended dosage on the label. Be sure to use only pain relievers you know you can take without worry of an allergic reaction or other complication.

You also may find that placing a cool, dampened washcloth over your closed eyelids is comforting.

Do not rub your eyes. If your symptoms persist longer than a day or two, or if symptoms worsen after 24 hours, see an eye doctor immediately.

How To Avoid Snow Blindness

Simply wear sunglasses that block 100 percent of the sun's UV rays whenever you are outdoors during daylight. Sun-sensitive photochromic lenses are another (and even more convenient) option. Be aware that ultraviolet radiation penetrates clouds, so there is a risk of sunburned eyes even on cloudy or overcast days.

For skiing, snowboarding, water sports, or anytime you plan to be outdoors for extended periods of time, invest in quality sunglasses that also feature a wrap-style frame to protect your eyes from indirect as well as direct sunlight.

For maximum protection, look for sunglasses, snow goggles or sports goggles that have side shields or a soft rubber flange that completely block(s) sunlight from striking the front of your eyes from the sides, above and below.

If you are unsure whether your current sunglasses block 100 percent of the sun's UV rays, ask your eye care practitioner to check them for you.

READ MORE about other kinds of keratitis and their causes

How can the sun damage your eyes?

What UV protection do I need for my sunglasses and why?

UV and sunglasses: How to protect your eyes