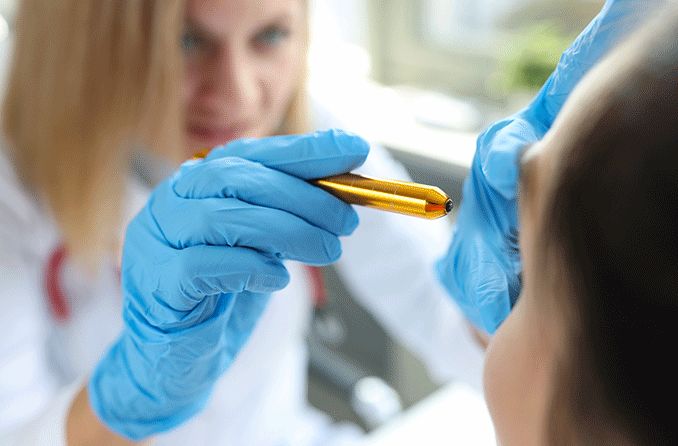 What is Argyll Robertson pupil?

Argyll Robertson (AR) pupil is a condition in which the pupils are able to focus on nearby objects but do not constrict properly in bright light. This difference in response is called light–near dissociation (LND). AR pupil is also characterized by small, misshapen pupils.

It is most commonly present in both eyes (bilateral) but can, in rare cases, affect only one eye (unilateral). Late-stage syphilis is the main cause of AR pupil. Diabetes mellitus and multiple sclerosis can also trigger the condition.

The lesion that causes AR pupil forms on the area of the nucleus that handles light reaction. The lesion does not affect the fibers responsible for focusing on nearby objects.

The lesion develops over time and sometimes unevenly. This leads to a slow loss of light response that is not always equal in both pupils. Eventually, the pupils may completely lose their ability to respond to light. The lesion can also lead to an atrophied or weakened iris.

There are several diseases that can cause Argyll Robertson pupil, the most common of which are discussed below. Other potential causes are chronic alcoholism, shingles, Lyme disease, encephalitis and neurosarcoidosis.

The most common cause of AR pupil is late-stage syphilis. Syphilis is a bacterial infection that causes lesions throughout the body. It is most commonly transferred through sexual intercourse.

When left untreated, syphilis can progress through three stages. The final stage, also called tertiary syphilis, can lead to the development of Argyll Robertson pupil.

Only one-third of individuals with syphilis will develop tertiary syphilis. During this stage, syphilis is not contagious.

READ MORE: Ocular syphilis: Symptoms and treatment when syphilis spreads to the eyes

Diabetes mellitus is a condition in which the body does not effectively regulate glucose levels in the bloodstream. Glucose is a sugar and the body’s main source of energy. AR pupil can develop when long periods of high blood sugar levels cause nerve damage that triggers lesions.

READ MORE: How diabetes can impact the eyes

Because MS can attack any part of the nervous system, symptoms will vary from person to person. If the lesions form in the area of the brain that controls the eye’s response to light, they can cause AR pupil.

How is Argyll Robertson pupil diagnosed?

The first sign of Argyll Robertson pupil is slow constriction in bright light. If the pupil is still able to constrict quickly to focus on nearby objects, the eye doctor will then look for small, misshapen pupils. They may also perform a slit-lamp exam to check for a weakened iris. This exam involves the use of a microscope with a bright light that allows the physician to see inside the eye.

If they suspect AR pupil, the eye doctor may refer the patient to an infectious disease specialist. The specialist will look for indications of tertiary syphilis. Tabes dorsalis, a form of neurosyphilis, is often present at this stage.

Pupil irregularities can also show up with tabes dorsalis, about half of which are AR pupil.

For an official syphilis diagnosis, the physician may do a spinal tap to test for antibodies in the cerebral spinal fluid (CSF). To perform this test, the physician will insert a long needle into the patient’s lower back to extract a sample of CSF.

If syphilis is ruled out, the next step may be to look for signs of diabetes mellitus or multiple sclerosis. A blood test called Hemoglobin A1c can be used to check for diabetes. A magnetic resonance imaging (MRI) of the brain is the most common test for multiple sclerosis.

How is Argyll Robertson pupil different from Adie’s tonic pupil?

How is Argyll Robertson pupil treated?

There is no current treatment for Argyll Robertson pupil, but its progression can be slowed by treating the underlying cause.

For patients with syphilis, penicillin or doxycycline are often prescribed. Patients are encouraged to work with both an eye doctor and an infectious disease specialist for treatment.

Antidepressants or anti-seizure medication may be prescribed to patients with diabetes. These medications help combat nerve damage.

Steroids are the most common treatment for those with multiple sclerosis.

How can Argyll Robertson pupil be prevented?

There is no current vaccination for syphilis. The best prevention is sex education and safe sex practices. If you are sexually active, it is important to seek regular STD screening.

The discovery of penicillin in the 1940s has helped lower the number of cases of syphilis in the developed world. However, case numbers have been on the rise since 2001.

Argyll Robertson pupil: What is it, causes, and more. Osmosis. Elsevier. Accessed June 2022.

What is a slit lamp? American Academy of Ophthalmology. April 2018.

Which STD test should I get? Centers for Disease Control and Prevention. December 2021.

PERRLA assessment test: What it is, how it’s done and what it stands for