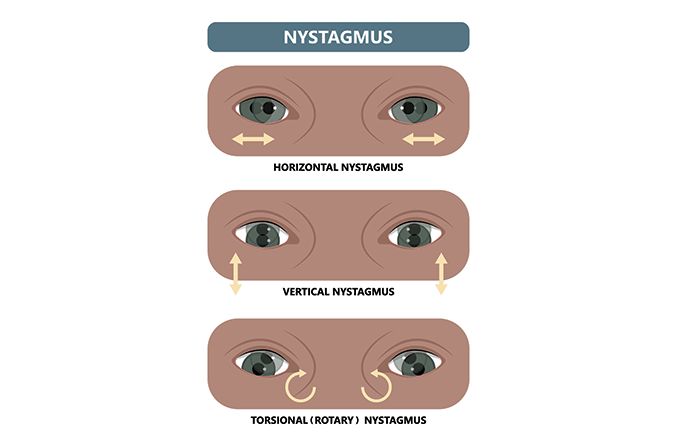 Nystagmus is a disorder that causes involuntary, rhythmic eye movements. Most forms of nystagmus disorder are caused by an underlying condition. The repetitive movements can make it impossible for someone to keep their eyes fixed and focused on any given object.

Eye movements due to nystagmus (“nuh-STAG-muhs”) can resemble someone trying to focus on nearby objects from a fast-moving train window. Other forms can cause much smaller eye movements.

Certain forms of nystagmus only develop in babies or young children. Others appear later in life, as the result of another disease or disorder.

Many different things can cause nystagmus, even in a single case. These typically fall under a larger condition that affects the brain, nervous system, eyes or inner ear.

Certain stimuli or actions can induce nystagmus when someone is exposed to them. Triggers can include:

Nystagmus is relatively rare. Between two and three out of every 1,000 people have some form of nystagmus, according to a study published by the journal Investigative Ophthalmology & Visual Science.

Most forms of the disorder have a neurological cause, but some are related to the inner ear. They can be classified as one of the following two types of nystagmus:

Among these two types, nystagmus can be further categorized by one of the following classifications:

The symptoms of nystagmus can vary based on the cause and type of each case, but one symptom will always be present: involuntary eye movements.

Unusual eye movements can be the only symptom someone with nystagmus experiences, but secondary symptoms often occur and may include:

Aside from infantile or childhood nystagmus, which can go away on its own, nystagmus can be difficult to treat or “cure.” The best chance of removing nystagmus usually lies in treating whatever is causing it.

Prescription eyeglasses and contact lenses may help people with nystagmus see better. Contacts are usually preferred, since the center of each lens moves along with each eye.

Certain types of nystagmus may be improved with medication or surgery. Some forms of treatment may have a better chance of success than others and may vary case by case.

Routine eye appointments are an important part of monitoring for eye problems like nystagmus.

If you or your child is experiencing irregular eye movements, schedule an appointment with an eye doctor. In some cases, your eye doctor may refer you to a specialist to perform a nystagmus test and decide if treatment might help.

If you have nystagmus and are sensitive to light, purchasing eyeglasses with photochromic lenses is often a good idea.

READ NEXT: What is Parinaud syndrome?