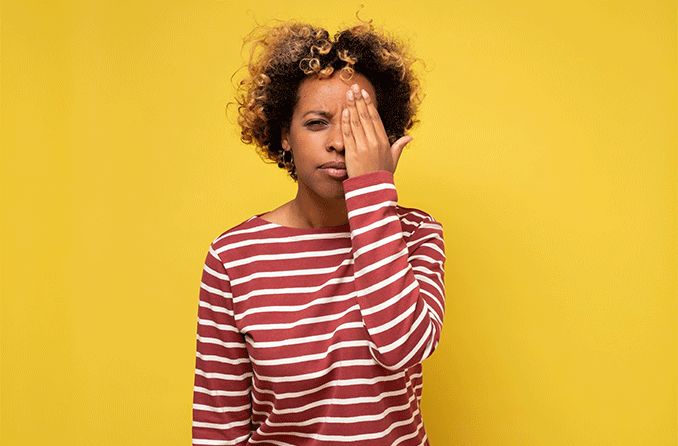 Monovision (also called blended vision) is nearsightedness in one eye. It can occur naturally, but it is often induced with corrective lenses or surgery for people who have developed presbyopia. Induced monovision can help people with presbyopia achieve an acceptable degree of clear near and distance vision without the use of bifocals.

Monovision means that one eye is nearsighted. This condition can happen naturally, but it is also commonly induced with surgery or corrective lenses as a technique to help people with presbyopia see more clearly both near and at a distance.

When monovision occurs naturally, one eye sees distance better and the other eye sees near objects better. A person with natural monovision might be able to avoid or delay using bifocals or other types of monovision correction when they do develop presbyopia, since one eye already sees better up close.

Induced monovision techniques provide the same benefit by using two different types of corrective lenses — one to help one eye see up close and the other eye to see far away. The dominant eye is usually chosen as the distance eye and the non-dominant eye as the nearsighted one.

Since the eyes work together, distance vision is usually not as clear after monovision as when the non-dominant eye wasn’t nearsighted. Compromise is required no matter the monovision technique.

With this noninvasive technique, a contact lens for distance vision is usually worn on the dominant eye and another lens on the non-dominant eye to correct near vision. Monovision contacts make the designated eye for distance slightly blurry up close, and the eye that sees well for near vision will be blurred when looking at objects in the distance. Both eyes work together, allowing acceptably clear vision at both distances.

Monovision contacts work well for many people, but there can be a decrease in the clarity of overall distance vision with some difficulty in seeing at intermediate distances, such as your computer screen, and some loss of depth perception.

For people with presbyopia, LASIK monovision is a popular option. This outpatient procedure fully corrects the dominant distance eye and makes the non-dominant eye slightly nearsighted.

Working in front of a computer, watching television, reading a menu and driving a car without glasses are all made easier (and clearer) after this procedure.

Cataract surgery involves replacing the eye’s natural lens with an IOL. To induce monovision with cataract surgery, one replacement IOL is used to optimize distance vision and the other to provide better near vision. The procedure can be done with monofocal, multifocal or accommodating IOLs, depending on the patient’s needs.

The goal is for both eyes to work together to provide clear, blended vision. This procedure works well for people who:

In some cases, after meeting with an eye doctor, LASIK surgeon or a cataract surgeon, a modification of monovision with cataract surgery, called mini monovision, might be a better choice.

In this surgical procedure, a smaller amount of nearsightedness is intentionally created in the non-dominant eye. Mini monovision usually provides slightly better distance vision (for driving, etc.) than monovision, but reading glasses might be needed more frequently than with standard monovision.

While many people don’t want to wear glasses, specially prescribed monovision work glasses can be helpful in the office setting. These glasses optimize the vision in the dominant eye for computer viewing distance and the non-dominant eye for things like hard copy spreadsheets and small print. They can also help prevent the undesired head and neck postures (“turtle-ing”) caused by peering through the bottom half of bifocals.

These glasses should not be used while driving or for distance vision, because vision will be blurry.

For people experiencing difficulty when driving at night, special prescription monovision glasses may also be worn over monovision contacts. These prescribed glasses contain a different prescription in each eye than the contacts, creating clear distance for safe driving.

SEE RELATED: Can glasses be prescribed for monovision?

If you recently received a nearsighted or farsighted prescription, have grown tired of wearing bi-focal glasses or want to learn more about monovision correction options, schedule an appointment with an eye doctor. Your lifestyle and eye exam will influence your options.

Monovision is not for everyone. Some people are unable to adapt to the new view of the world. Make sure your eye doctor understands your needs and expectations, and make sure you understand what is achievable. Your eye doctor will usually recommend a trial with monovision glasses or contacts before committing to a surgical monovision procedure.

Nearsightedness: Does it have another name?

Can someone go blind from myopia getting worse?