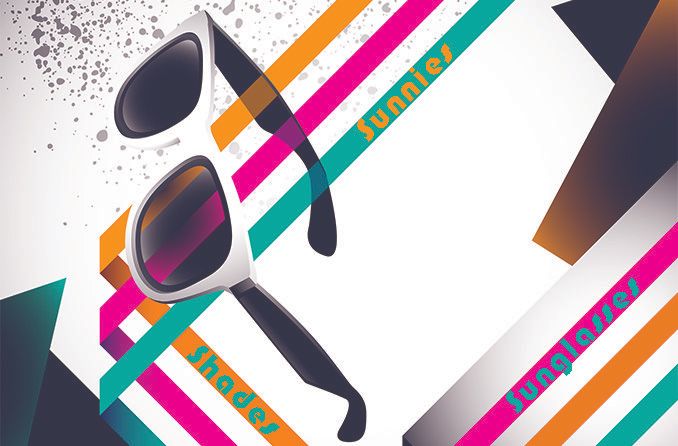 Nothing saves your eyes on a bright day, adds the finishing touch to your new outfit or makes you feel cooler than a pair of sunglasses, sunnies or shades. So what’s the difference between the various names we give this always-important outdoor eyewear?

Although the quirky terms we assign sunglasses generally mean the same thing, what we call them and their popularity vary around the world.

What do we mean? Let's don our sunglasses (or sunnies or shades) for a world tour:

In the United States, sunglasses is the most widely used term. In the early 20th century, shades and sun cheaters also grew popular as more informal names.

The use of sunnies originated in Australia, but the term often is used by fashion-oriented Americans who see sunglasses as an accessory.

In 1929, Sam Foster spearheaded the first mass-production of sunglasses. He sold sunglasses in Atlantic City, New Jersey, and they quickly became popular as a fashion statement rather than a means of sun protection.

Polarized lenses followed shortly thereafter in 1936 when Edwin H. Land placed a Polaroid filter over lenses as one of his experiments.

If you’re planning a trip down under, be sure to pack a trusty pair of sunnies or spekkies.

“It’s common for Australians to shorten words and end them with ‘ie’,” says Katie Holmes, a lead editor at OutwitTrade in Australia. “Breakfast is ‘brekkie,’ ‘mozzie’ for mosquitoes and ‘bikkie’ for a biscuit.”

Australia’s location on the globe results in much higher, more intense UV radiation than in Europe and much of the United States. This increased UV strength requires an elevated standard for how sunnies protect people’s eyes, known as the Australian Standard.

This standard sets limits for light and ultraviolet radiation that passes through adult and children’s lenses. Spekkies that meet Australian requirements guarantee your eyes have sufficient protection against sun damage.

Residents of Verona, the city of love, have a particular fondness for their Occhiali da sole — the direct translation for “sunglasses” in Italian. With an average of four hours of daily sunshine during the winter and nine hours during the summer, it’s not uncommon for Italians of all ages to sport a pair of shades.

In fact, wearing sunglasses may be a hint to your Italian nationality for non-Italians.

Lifestyle blogger Laura Teso, who lives in Italy, recounts visiting Germany with her husband and being called out as Italians by German natives. What gave them away? Their sunglasses, of course!

Glasses with green-tinted lenses date back to 1790 in Venice, where gondoliers used them to protect their eyes while working in the canals.

Carlo Goldoni, a then-famous actor who rocked the emerald lenses, made them popular in society. The first attempt at protective sunwear were dubbed “Goldoni glasses” for this reason.

Before you enjoy Germany’s famous bread, beer or sausage, throw on a pair of sonnenbrille (zon-en-brill-uh). DV Henkel-Wallace, who lived in northwest Germany and Berlin, explains the term is normally shortened to brille and warns that the language can be tricky.

“The klobrille is the toilet seat,” he reveals. “And while it's generally pretty obvious whether they mean something you use with your face or your bottom, it always causes me to stop for a moment.”

Although Germans use sun specs, they often regard them as a summertime-only accessory. Because of their geographical location, the sun sits lower in the sky and doesn’t have the same intensity that it has elsewhere, so the “need” for sunglasses doesn’t feel as crucial.

However, just because the sun isn’t bothering your eyes, doesn’t mean you shouldn’t wear shades. A good rule of thumb is that if it’s daytime, and you’re outside, then your sunglasses should be on.

The English put on their sunglasses and sunnies, the same terms primarily used in the U.S., while some people use shades to describe frames with dark lenses that make it difficult to see the wearer’s eyes.

Although there is much debate on where sunglasses were first created, it seems the first success in producing lenses that blocked 100% UV and 90% infrared was in 1913 by Sir William Crookes.

Crookes made lenses from glass that contained cerium, a silvery chemical that blocks UV light, now known as Crookes lenses. His effective invention makes England the birthplace of protective sunglasses.

Few accessories go better with a Scottish kilt than a pair of glecks. Scotland has only 29 to 58 sunny days per year, so residents don’t often feel the need to gear up with glecks.

But just because the clouds are shielding the sun, doesn’t mean a pair of sunglasses isn’t necessary. The sun can still reach you and damage your eyes through cloud cover, so even in Scotland, wearing your glecks is important.

We recommend a pair with amber or rose-tinted lenses, which provide clarity and contrast in overcast or cloudy conditions, while still protecting your eyes from damaging UV rays.

In fact, a Scotland-based sunglasses company called tens uses rich, warm colors in its lenses to bring the appearance of sunshine in Scotland’s often-gloomy conditions.

No matter what you call them, just make sure you wear them

Different corners of the world have diverse names and preferences when it comes to sunglasses, but the need for them to protect against sun damage is universal. Whatever you choose to call them, a pair of UV400 sunglasses is crucial for protecting your vision and eye health.

NEED A NEW PAIR OF SHADES (OR SUNGLASSES OR GLECKS)? Find some cool new sunglasses at an optical store near you or an online eyewear retailer.