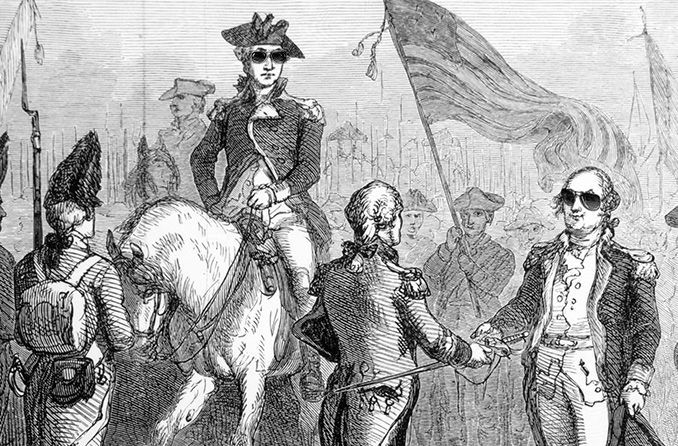 Sunglasses are such a common part of everyday eyewear, it seems impossible to imagine a time without them. But when were sunglasses invented, and who invented them?

Ancient forms of sunglasses have been discovered as far back as the prehistoric Inuit period. Inuit people are believed to have emerged from western Alaska and Canada around 1000 common era (CE).

Residing in snow-heavy areas, the Inuit are believed to have developed a form of snow goggles to protect them from photokeratitis, also known as snow blindness.

Artifacts discovered from this time were made of driftwood, ivory and bone with narrow slits carved into the front of the eyepieces. They further reduced glare by coating the carved-out openings with gunpowder and soot.

The first pair of darkened glasses are believed to have emerged in China in the 12th century, but they were only available to the very wealthy and were used primarily to hide the emotions of legal officials.

In the late 1700s, James Ayscough, an English optician, suggested adding tint (primarily blue, green and amber) to eyeglasses to treat a variety of vision problems. As a result, Ayscough is often credited as the official inventor of sunglasses, even though the glasses he invented were not actually meant to protect the eyes from the sun.

Crookes’ lenses were then introduced in the 1900s. Sir William Crookes was a British chemist and physicist who invented a 100% ultraviolet-light-blocking sunglass lens made from glass containing cerium. However, it would be another 29 years before the idea of wearing sunglasses on a regular basis began to take off.

In 1929, Sam Foster launched a plastic manufacturing company in Massachusetts and began producing celluloid, among other products. Soon after, the first plastics injection molding machine was perfected. This machine made it possible to produce mass marketed celluloid sunglasses for the first time.

Foster soon began selling sunglasses under the name Foster Grant from a Woolworth store in Atlantic City, New Jersey. By 1937, 20 million sunglasses were reported to have been sold in the U.S.

Since then, sunglasses have become a huge part of our everyday culture. Today, the United States is home to the largest sunglasses market in the world, generating more than $4.66 billion in revenue in 2018.

Foster Grant glasses are still sold, by the way, in CVS, Walgreens and other stores.

READ MORE: The history of sunglasses

When were polarized sunglasses invented?

Edwin Land, who founded the Polaroid Corporation in Cambridge, Massachusetts, developed the first sunglasses with a polarizing filter in 1929.

In 1935, he negotiated with American Optical Company to produce the first polarized sunglasses.

Polarized lenses have a special filter that blocks intense reflected light, reducing glare and enhancing visual clarity. Polarized lenses are highly recommended for many sports and activities because they reduce glare from light reflecting off flat surfaces, such as water, sand or a field of snow.