Tactile paving: The sidewalk bumps that serve an important purpose 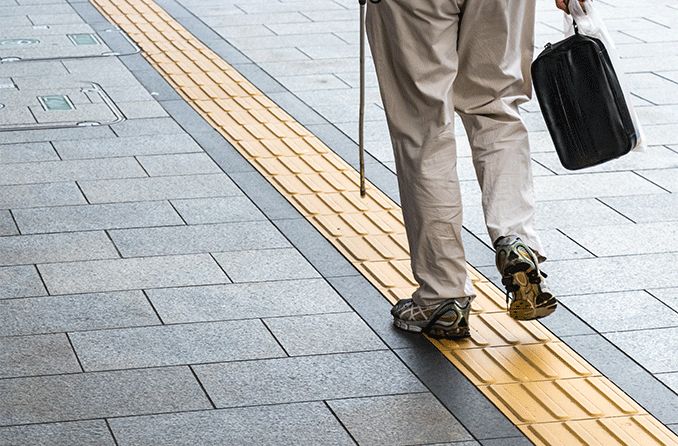 What is tactile paving?

If you’ve ever used public transit or walked around a pedestrian-friendly city, chances are you’ve stepped on a variety of sidewalk “bumps” or “patterns” along the way. You may have also seen them on train platforms or just before stepping onto a crosswalk.

These bumps are part of a special style of pavement called tactile paving. They provide a safer, more accessible environment for people who are visually impaired. Here’s how:

Tactile paving, or tactile pavement, is a group of patterns, raised lines, domes and other various textures that are used to alert those with a visual impairment, such as low vision or blindness, of a change in the area.

During a stroll through a city or public space, you may have noticed yellow bumps on the sidewalk as it transitions from a crosswalk to a roadway. Maybe you’ve stepped over a group of ridged patterns before or after a flight of stairs. Both of these are examples of tactile paving.

Oftentimes, the bumps are painted in different colors such as yellow or dark red. This is to help provide a color contrast between the pavement and the bumps themselves. The color contrast is particularly helpful for those with low vision, who don’t use a cane or walking stick to help them navigate.

Japanese inventor Seiichi Miyake invented tactile surfaces for the blind in 1965, and they were officially introduced in Okayama City in March 1967. From there, the concept quickly spread across Japan and was used in Japan National Railway stations and other places with heavy foot traffic.

Tactile paving is sometimes referred to as detectable warning plates or ground surface indicators. Originally, it was known as Tenji bricks.

When it was first developed, tactile pavement was made of precast concrete. It’s now made out of materials such as ceramic, concrete and stainless steel.

Although tactile paving has been around since the 1960s, it didn’t make its way to the United States until the ‘90s, when the Americans with Disabilities Act of 1990 was passed. Additional countries adopted the textured pavement at the same time, including Australia, Canada and the United Kingdom. It’s now used all over the world.

Types of tactile paving (and their purposes)

There are three types of tactile paving that are designed in different ways to serve individual purposes. They are:

Where is tactile paving used?

There are several different locations where you may find tactile paving, including:

The next time you are in one of these areas, be on the lookout for the special patterned paving!

Why is tactile paving so important?

Those who are visually impaired rely on tactile paving to help them get across town, whether they’re going to work, running errands, traveling or participating in other activities. In 2018, BBC contributor and London resident Amy Kavanagh, who is visually impaired, wrote about her experience with tactile paving.

“Those bumps, lumps and stripes give me so much information, especially on days when my vision is more limited,” she said of attention-type paving patterns.

And when it comes to guiding patterns, she remarked, “The stripy corduroys tell me when a set of stairs is going to start and stop, meaning I can then use my cane to feel my way up or down.”

But as far as the most beneficial part of tactile paving, Kavanagh says, “The best thing about tactile paving is that it gives me clues about my environment on an unfamiliar route. It tells me when to be aware of potential hazards, like platform edges or cycle lanes.”

Without tactile paving, Kavanagh and other people with visual impairment could face greater risks as they navigate cities and transportation systems.

SEE RELATED: Yes, you can travel if you're blind or have low vision

What is tactile paving? Central Association for the Blind and Visually Impaired. August 2020.

What do tactile pavements tell us? Henshaws. March 2017.

Tactile paving: The secret code that helps me get around. BBC. July 2018.

Resource Guide for the Legally Blind

Yes, You Can Travel If You’re Blind or Have Low Vision

Resources for the visually impaired