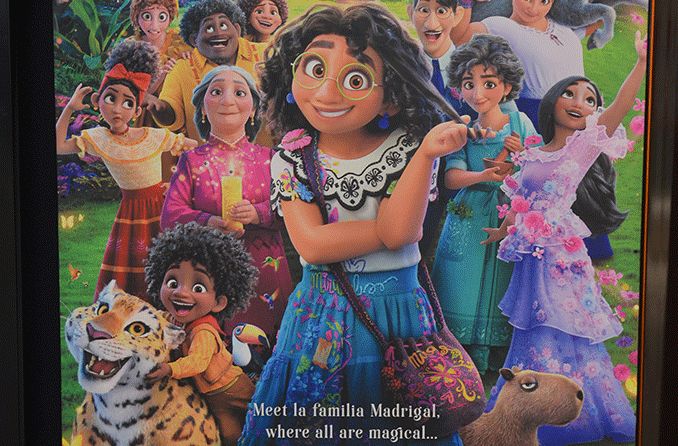 Here’s why these weaknesses end up being her strengths in the end — and how the fact that she wears glasses has helped kids around the world feel less alone in their vision journeys.

What is Encanto about?

Encanto tells the story of the Madrigals, a Colombian family full of magic. Throughout several generations, each family member is given a special gift that makes them superhuman. Gifts can be anything from seeing the future to talking to animals, or even the strength to literally move mountains. It’s all in the magic of where they live, a place called Encanto (which translates to “enchanted”).

Family members receive gifts when they’re children, and they grow up to play a special role in the village where they live. But there’s one person who never received a gift when she was young — Mirabel Madrigal.

While Mirabel is lighthearted and ambitious, she sometimes feels like an outcast without her own magical gift. Even so, she is crucial to the structure of both the Madrigal family and the town of Encanto. Throughout the tale, Mirabel faces challenges that slow her down, but in the end she finds her gift and understands the important role she plays within her family.

Why does Mirabel wear glasses in Encanto?

According to Jared Bush, one of the film’s directors, Mirabel wears glasses because “we wanted to draw attention to what/how we see.” Mirabel’s name also follows this theme: “In Spanish, “Mira” means “look,” and the whole film is about learning to see each other fully.”

While a diagnosis isn’t mentioned, it’s possible that Mirabel has a type of refractive error (such as myopia) that makes it hard for her to see clearly without her glasses.

Mirabel’s glasses also serve as a reminder that she doesn’t quite fit in with her gifted relatives, offering a relatable main character for people who feel vulnerable because of their vision condition.

Mirabel’s glasses are a bright shade of lime green, the same color as her uncle Bruno’s visions, making a subtle connection between the two black sheep of the family.

During his visions into the future, Bruno’s eyes turn a bright shade of green, and the images he sees are illustrated in the same color. The problem is that some of his visions were linked to the downfall of the family’s magic, and Mirabel was the subject of one of his most ill-fated looks into the future.

There’s a real-life connection behind Mirabel’s glasses in Encanto and a girl who dreamed of having her to look up to — and it’s heartwarming to say the least.

A young girl named Lowri from Nottinghamshire in the United Kingdom is the only member of her family who wears glasses. She dealt with feelings of loneliness and feeling unpretty. So she decided to write a letter to Disney and ask that they create a princess or hero who wore glasses that she could look up to.

Producers of the film Encanto couldn’t speak out at the time, but they already had a special glasses-wearing character in the works: Mirabel Madrigal.

Although Lowri technically didn’t have the idea for Mirabel and her glasses, Jared Bush, one of the film’s directors, proudly acknowledged that her wish came true in a statement on Twitter.

Lowri reported back that she is very happy that she and other kids who wear glasses now have a Disney role model — one who not only wears glasses of her own, but is brave and funny and saves the day in the end.

Like Mirabel and Lowri, kids with glasses often feel different. But it’s their differences that make them unique and powerful in their own situations.

SEE RELATED: How Arthur the Aardvark made glasses cool for kids

Other Disney characters who wear glasses

Disney has always been inclusive of glasses wearers. Just in case you (or your child) don’t relate to Mirabel in Encanto, there are several other optical role models to choose from in the Disney universe, including:

What superpowers do your glasses give you?

How Arthur the Aardvark made glasses cool for kids

How to get kids to wear glasses