Beyoncé’s sunglasses are almost as famous as she is. 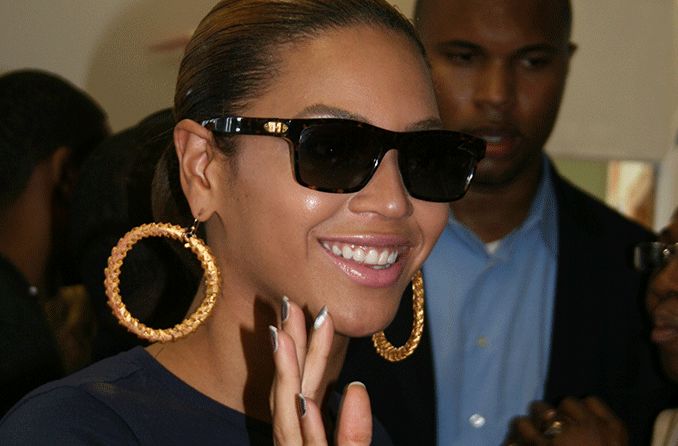 Beyoncé Giselle Knowles-Carter – aka the legendary Beyoncé or Queen Bey – has had an enormous influence on the world of music, dance and fashion. Whether she’s stepping out in a black gown or burgundy skin-tight trousers, her endlessly inventive wardrobe, both on and off stage, offers inspiration to her many fans.

Many of her ensembles include stunning sunglasses. Each pair of sunglasses Beyoncé wears is an important piece of the unforgettable visual and musical experience that she creates. Consider how these stunning Choi crystal chain sunglasses by A-Morir complement the tiger stripes of her green and black body paint. This particular outfit was designed for the musical that she wrote, produced and directed, entitled “Black Is King.”

What sunglasses did Beyoncé wear in “Black Is King”?

In “Black Is King,” Beyoncé’s 2020 visual album inspired by “The Lion King,” the artist celebrates the history and beauty of black ancestry. Her ever-changing wardrobe draws on ancient African iconography and exquisite haute couture.

“Black Is King” has been called a “show-stopping love letter to eyewear.” Many of the glamorous crystal-encrusted sunglasses Beyoncé wears were designed by Kerin Rose Gold, of A-Morir, who is known for her sparkly eyewear. Kerin Rose Gold has worked with Katy Perry, Lady Gaga, Snoop Dogg and others. In one scene, Beyoncé wore A-Morir Pebbles crystal glasses along with a Valentino-designed catsuit that reportedly took 300 hours to craft.

Beyoncé also featured the more affordable sunglasses of the Australian brand Poppy Lissiman, all priced under $150. According to Refinery 29, the singer wore Poppy Lissiman red-lensed cat-eyes along with a floral tea-party gown. She also wore crystal-encrusted yellow frame glasses from the designer.

What sunglasses did Beyoncé wear in Mood 4 Eva?

In 2019, Beyoncé released “Mood 4 Eva,” one of 27 tracks on her companion album to “The Lion King” movie, “The Gift.” The song, performed in collaboration with her husband Jay-Z and the artist Childish Gambino, featured a truly extraordinary pair of sunglasses. The narrow, angular elongated black sunglasses were a collaboration between Poppy Lissiman and indie brand Puppets and Puppets. The sunglasses topped off a custom leopard print outfit designed by Kutja & Meri.

In another scene, she wore large, turquoise-rimmed sunglasses and a matching turquoise necklace and blue robe as she dined next to her husband.

At the 2013 Super Bowl, Beyoncé went casual in a sweatshirt and pants, decked out in round spectacle-like Wildfox Couture Winona sunglasses, which can be found on eBay and other sites for under $200. Seven years later, at the 2020 Super Bowl, Beyoncé wore a green blazer and skin-tight green pants, a choker necklace, and brilliant white-rimmed cat-eye sunglasses. Cat-eyes are one of her go-to styles.

What are Beyoncé’s “everyday” sunglasses?

Beyoncé shared photographs of that date night on her Instagram account. The glam, retro sunglasses dangled a Swarovski crystal on either side. The crystal attachment is actually an Aurora Borealis Swarovski Briolette, which adds just the right hint of sparkle.

In 2016, Beyoncé, like the pop star she is, wore sunglasses indoors when Jay-Z took her to an NBA game.

And in 2018, at the Grammy Awards, she wore sunglasses in an eye-catching ensemble with a black dress and huge silver earrings at Madison Square Garden. While Beyoncé and Jay-Z rocked the night in black, their daughter Blue Ivy was decked out in a white dress.

This year, in 2021, Beyoncé earned her 28th Grammy Award, becoming the most awarded woman in Grammy history, according to Harper’s Bazaar.  She and Jay-Z wore sunglasses and pandemic-style masks to the ceremony. Beyoncé rocked sleek cat-eye shades and enormous gold and black earrings, while Jay-Z wore round spectacles.

Beyoncé’s sunglasses can sometimes be pricey, but there are many more affordable look-alikes you can find online. If you’re seeking more inspiration, take a look at 100 different pairs of sunglasses she has worn in this collection on Pinterest.