Everything You Ever Wanted to Know About Persol Sunglasses 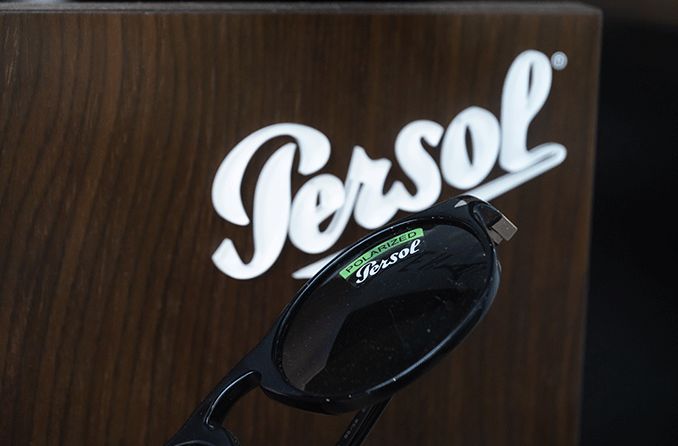 Worn by pilots, race car drivers, mountain climbers and Hollywood A-listers alike, nothing quite says you value style as much as substance as a pair of Persol sunglasses. Indeed, few brands have stood the test of time like Persol. Founded in Italy over a century ago, Persol is synonymous with quality, elegance, innovation, comfort and style.

In this ultimate guide, we’ll take you through everything you need to know about Persol sunglasses — the history behind the brand, its technology and terminology, why you should choose Persol, available styles, and more.

It all began in Turin, Italy, in 1917, when photographer and optician Giuseppe Ratti developed what he called Protectors. These glare-reducing glasses for pilots not only protected them from sunlight but were also comfortable to wear.

Featuring round, smoked lenses and rubber-lined frames attaching to the wearer’s head with elastic bands, Ratti’s Protectors became a staple among aviation and motorsport enthusiasts. The style was soon adopted by armed forces worldwide, including the Swiss Military and the United States Air Force (then, the Army Air Corps).

Throughout the 1920s, Ratti further developed his Protectors, crafting lenses from pure silica and tinting them in his now-signature yellow-brown with a special “en masse” manufacturing process. The tint guaranteed protection from the sun’s harmful rays, a method unique at the time only to Ratti’s sunglasses.

Soon, the Persol brand name was born. Although “Persol” sounds extraordinarily fabulous, the term is incredibly pragmatic — it is merely an abbreviation of the Italian words “per il sole,” meaning “for the sun.”

From the 1930s to the 1950s, Persol continued to advance its technological developments, focusing now on flexibility and comfort. Its first significant innovation was introducing the now-famous Meflecto, the world’s first adaptable stem system. Meflecto was an intricate design where metal cylinders were inserted into the acetate stem allowing Persol glasses to be worn for extended periods without putting extra pressure on the wearer’s skull.

The Meflecto system was followed by the Victor Flex, a supple, three-notch nose bridge that ensured Persol glasses fit comfortably on any face. Victor Flex is still used in the Persol 649 model to this day.

Around the same time, Persol also launched the Freccia, or Silver Arrow. This is the brand’s trademark and unmistakable design, which later developed into the Supreme Arrow.

Inspired by the swords of ancient warriors, the design consists of a hinge adorned with a silver arrow extending to the stem. It is functional, decorative, and epitomizes the very essence of Persol sunglasses: a seamless marriage of performance and style.

During the 1960s, Persol expanded its portfolio by developing special safety goggles equipped with different filters. These technological advances won the brand more than 35 international patents and garnered Persol worldwide renown, along with lucrative international contracts with organizations such as NASA.

Meanwhile, the 1960s also ushered Persol into the cultural mainstream, thanks to Italian film star Marcello Mastroianni. Mastroianni showcased the classic Persol 649 model in the movie “Divorce Italian Style.” Simultaneously, across the pond, Hollywood legends like Peter Fonda, Greta Garbo and, of course, Steve McQueen donned Persol sunglasses both on- and off-screen.

Away from the silver screen, Persol invested in technological research and development. In the 1980s, they developed polarized lenses, which reduce glare from surfaces including water, sand and snow. Persol became the go-to brand for extreme athletes, extending their reach beyond aviators to Dakar Rally drivers, Russian astronauts and Italian mountaineers.

A powerhouse of elegance

The 1990s saw Persol’s commercial breakthrough with the 1991 opening of the first Persol boutique on Rodeo Drive in Beverly Hills, California, and its expansion to more than 15,500 stores across 40 countries around the globe.

In April 1995, eyewear conglomerate Luxottica Group bought Persol, elevating its standing as one of the world’s most influential luxury brands without compromising its deeply rooted commitment to quality and tradition. To this day, Persol sunglasses are handmade in its historic factory in Lauriano, Italy, and the brand maintains its image of a powerhouse of craftsmanship, quality, comfort and style.

Persol is more than just a sunglasses brand — it has been an innovative eyewear manufacturer for more than a century. Any potential Persol wearer should know all about its signature technology, functions and style. Here is a quick look at Persol’s brand terminology.

Meflecto: Patented in the late 1930s, Meflecto technology is the world’s first flexible stem system, eliminating pressure by allowing the temples to adapt to any size head.

Silver arrow: Persol’s trademark, which was invented in the 1930s, is in homage to the swords of ancient warriors and combines function and style.

Acetate: Stronger, lighter and more flexible, Persol frames are made using acetate, a plastic made from natural cotton-based fibers.

Polarized lenses: Coated with a layer of organic polarizing material, polarized lenses reduce glare and reflections from surfaces such as asphalt, sand, water and snow.

Since the 1960s, Persol has been featured in movies across the globe. From Italian film noir classics such as “La Dolce Vita” to modern-day James Bond flicks, Persol’s relationship with the screen has been as steady as its designs. Persol frames are also featured in “The Terminator,” “Ocean’s 11,” “The Talented Mr. Ripley” and the 1980s hit series “Miami Vice.”

But it’s not just actors who have been seduced by Persol’s timeless elegance. Stars such as the late celebrity chef Anthony Bourdain, rapper Jay-Z, Formula One champion Lewis Hamilton and even the future King of England, Prince Charles, have all been spotted wearing Persol men’s sunglasses.

Of course, the brand’s unrivaled poster boy is none other than the late actor and style icon Steve McQueen, who widely popularized the brand in the 1960s and 1970s. A passionate motor-racing aficionado, McQueen was frequently photographed sporting the Persol 649 style.

McQueen was also associated with the Persol 714 model.  His unique pair of Persol 714 sunglasses from the 1968 flick “The Thomas Crown Affair” are nothing short of legendary. The world’s first-ever foldable sunglasses, featuring light Havana frames and polarized blue lenses, the glasses became so iconic that in 2006 they were sold at auction for $70,000.

McQueen remains synonymous with Persol. The Steve McQueen limited series featuring polarized 24K gold-plated lenses is one of the brand’s most exclusive products.

Should you buy Persol sunglasses?

With hundreds of luxury designer sunglasses available, why should you choose Persol over another brand? The answer is simple: Buying Persol sunglasses is more than just a fashion statement; it’s an investment.

Persol wearers appreciate the brand’s craftsmanship and style but also value Persol’s quality and longevity. They are people who place importance on technology and innovation but aren’t driven by temporary fashion fads. They favor timeless elegance over contemporary or futuristic designs. People choose Persol because they know that their chosen glasses will be a part of their style for years to come.

So, if you’re looking for quality and sunglasses that will stand the test of time, Persol might just be the perfect match for you.

SEE RELATED: The best glasses for your face shape and skin tone

Here’s a look at Persol’s most popular styles.

Initially developed in 1957 for Turin’s tram drivers, who needed large glasses to protect their eyes from air and dust, the 649 series is Persol’s most recognizable design. These glasses showcase Persol’s trademarks, including the Silver Arrow and Meflecto and Victor Flex technologies.

A trimmed-down version of the original, the PO9649S design has a more slender overall profile with a slimmer frame and thinner temples.

Launched in the 1960s as the world’s first foldable sunglasses, the Persol 714 sunglasses were made famous by Steve McQueen after he wore them in the film “The Thomas Crown Affair.” Similar in style to the 649, although slightly flatter, the 714 model has hinges at the stems and bridge, allowing it to fold up to fit inside any pocket compactly.

The Persol 714 foldable sunglasses were made famous by Steve McQueen in 1968.

In celebration of the style icon himself, the Steve McQueen limited series is a step up from the original Persol 714s. The series features an upgraded folding closure system on the stem’s end — the stem folds from the outside in, rather than from the top-down as before. And, a pair comes with a compact leather carrying case.

With Steve McQueen branding inside the temple, the glasses also feature the Supreme Arrow both on the front hinges and the folding hinge half-way along the stem. Each pair comes with polarized lenses and is available in Caffè, Light Havana with blue lenses, Black 95 and Havana with 24K gold plated lenses.

Inspired by the ancient art of calligraphy, and drawing on the connection between this skill and Persol’s craftsmanship, this series features a fine acetate rim with a metal bridge and engraved striations on ultra-light metal temples. The Calligrapher Edition is available in the classic pantho and modern square styles.

The Persol PO3166S model is part of the Calligrapher series and showcases the panthos frame combining acetate and ultra-thin metal.

Persol makes many different styles of frames beyond the classic models that are so well known. Some, like the ones that follow, are quite different from the 649 and 714-series frames.

One of the most popular models among Persol men’s sunglasses, the Persol PO2803S sunglasses feature polarized lenses and softly squared profiles, marrying the classic vintage style with a more contemporary look.

The most recent addition, the Persol PO3260S sunglasses, are a redesign of the iconic 649 model reinvented with a rounded acetate frame. The style comes in seven colors, ranging from classic black and Havana to a brown tortoise model with opal blue accents.

How to get your own Persol sunglasses

If you have decided that Persol sunglasses are for you, you can buy these and many other styles direct from Persol online, from many online retailers, like Frames Direct, or from local optical stores.

Many Persol frames are also available as prescription sunglasses. Make sure to visit your eye doctor to get a current prescription before ordering your favorite style.

READ NEXT: Are Persol sunglasses in the top ten most popular shades in your state?

Tiffany sunglasses collections and where to buy them

Are brand name sunglasses worth the investment?