MLG glasses: Why they’re the perfect choice for meme lovers 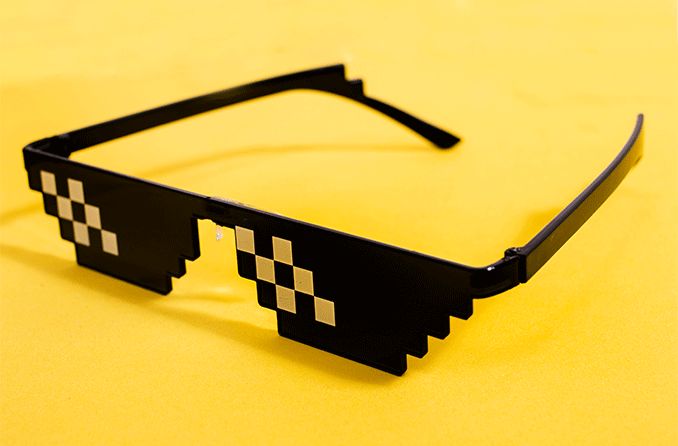 The practical nature of sunglasses shouldn’t stop them from being trendy. Sunglasses can come in various fun shapes, frames and tints to add fun to mere functionality.

For those looking to stand out, turning to pop culture is often a good way to garner compliments and ensure your glasses are recognized and appreciated by fellow aficionados.

For example, if you’re a fan of the ever-growing internet meme culture, MLG (or Major League Gaming) glasses can be a cool alternative to regular sunglasses. They’re a celebrated image in the world of memes, popularly known by other names such as “deal with it,” “thug life” and MLG swag glasses.

But before you learn more about these trendy shades, you must learn about their history. If you are looking to add them to your wardrobe, it is also essential to know where you can buy them and what features you should definitely be looking out for.

History of the MLG glasses meme

MLG glasses became a thing after the Thug Life meme gained popularity in the early 2010s. Since then, they’ve been used in memes and videos where a pair of pixelated MLG glasses literally drops from the skies and lands perfectly onto someone’s face as a clear sign of victory. The iconic design features black frames and dark-tinted lenses with patterns that mimic the original 8-bit pixel art.

To understand their relevance, it is crucial to explore the meaning of the original meme. Originating from the idea of “thug life,” these glasses represent a still-popular internet sensation. While some people may mistake the purpose of the phrase “thug life,” the implication does not have any connotations of lawlessness or criminal behavior.

Instead, according to dictionary.com, the term “thug life” comes from Black hip-hop culture and refers to a determined and resilient drive to succeed despite systemic racism and injustice. “Thug life” was initially popularized by the rapper Tupac Shakur, who had the words “THUG LIFE” tattooed across his stomach. The thug life meme and the accompanying MLG glasses pay homage to this very sense of confidence and resilience.

The format of the meme itself is rather straight-forward. Knowyourmeme.com explains how the meme focuses around a central character who cleverly defeats or ridicules someone, verbally or nonverbally. The video versions of the meme present situations where one person snaps at another using confrontational language, winning an argument. Another popular thug life meme is a crossover where Kabosu, the internet-famous Shiba Inu dog, wears his very own Doge MLG glasses.

What follows this scenario is a freeze-frame and close-up of the winner with an instrumental fade-out to the 1992 gangsta rap “Nuthin’ but a 'G' Thang” by Dr. Dre featuring Snoop Dogg. The close-up image usually has two objects superimposed on the person to highlight the cool “thug life” attitude — a marijuana joint and the MLG meme glasses.

The Thug Life meme is still popular and has established itself as a strong contender among those immortalized in the meme hall of fame. Even today, content creators make use of the style to create impactful designs on various social media platforms.

What this meme does is perfectly represent a counterculture that has little to no regard for authority. The format may have evolved over the years, but the original emotion behind it, and the imagery of the pixelated glasses, have remained the same.

Buying MLG glasses can sometimes get a bit tricky. These glasses are mostly made for use as party props, so they may lack some features considered essential in standard eyewear. If you’re looking to get a pair for a party or other entertainment purposes, you can usually get one of the cheaper models that come without any flashy features.

However, if you want your MLG thug life glasses to also function as proper sunglasses, there are certain features that you should look out for:

Who can use MLG glasses?

The best part about MLG glasses is that anyone can wear them, irrespective of age or gender. The MLG glasses feature a unisex design, and both children and adults can instantly become cooler just by wearing a pair. Even if you aren’t familiar with the meme, the unique aesthetic of the glasses will make them a great addition to anyone’s collection.

However, since their origin is rooted in memes, thug life glasses are most appreciated by meme makers and users around the world. Content creators who use platforms such as TikTok, YouTube and Twitch can use these glasses to make viral content that the general public can enjoy and relate to. It can be the perfect prop for paying homage to the original meme.

The gaming community is rather fond of both the original glasses and the meme. Since the popular gaming platform Roblox included the glasses in their catalog, they’ve become an absolute favorite in the community.

Minecraft, too, allows its players to experiment with MLG glasses. The game’s pixel-art style goes perfectly with the aesthetic so some gamers even created MLG 8-bit Minecraft glasses for others to download and use.

So, if you’re an avid Roblox or Minecraft player, or an ardent cosplay artist, you should definitely add a pair of MLG gamer glasses to your collection, and don’t be surprised if you see MLG glasses on Minecraft characters in the future.

Owing to their popularity, MLG glasses have become widely available and are no longer limited to their original black lens tint. The frames and lenses now come in numerous shades with varying benefits:

Where to buy MLG glasses

The internet has solidified the Thug Life meme as one of the most popular formats ever, so it comes as no surprise that the meme’s coolness quotient went on to create a demand for MLG glasses. But while several online retailers sell these glasses, it is essential to carefully select a pair that is efficient, durable and worthy of its price.

Some of the better-known online retailers include:

If you aren’t set on functionality, you can probably find a less durable pair of MLG glasses in a shop that specializes in party planning and entertainment props, either online or locally.

Even though the thug life meme originated in 2014, the concept’s versatility has kept it relevant even today. The addition of MLG glasses to different games has only added to their popularity among various online communities. Once inseparable from the meme, thug life glasses have attained an iconic status of their own, becoming recognizable in almost any setting.

While you don’t have to worry much about quality when using MLG glasses as a party prop, you do need to be careful when using them to protect your eyes from the sun. But as long as you do your research, you can end up with a cool pair of glasses that also doubles as fully functional sunwear.

Wraparound sunglasses: When are they the best fit?

Non-prescription sunglasses: What to know before buying