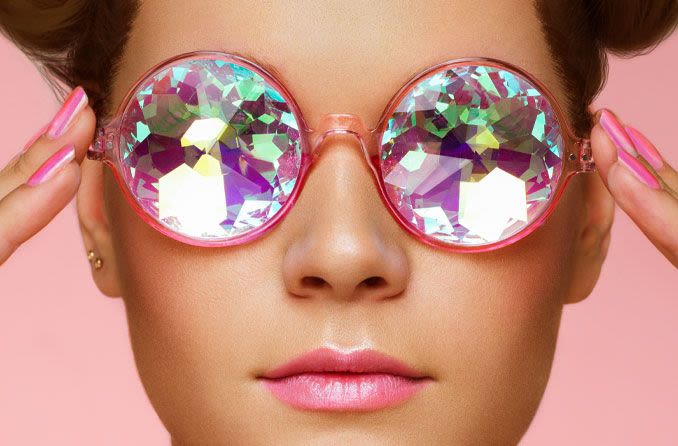 As founder of an architecture and interiors firm, Leslie Saul has to see lines, shapes and shades clearly. For nearly all her life that has meant Saul has had eyeglasses either on or nearby.

Over the years, she has collected a quiver of glasses, many of them exotic. In fact, when she marked 20 years at Leslie Saul & Associates, in Cambridge, Massachusetts, a photo of 20 pairs of her eyeglasses helped mark the occasion.

Saul started to wear glasses when she was in the third grade, after struggling to read the blackboard. Her reaction to her brown tortoiseshell glasses was mixed.

“I loved being able to see, but I wasn't so happy about wearing them,” Saul says now. “I had brown straight hair, and they were bought to match. That’s how it was done then. They were utilitarian.”

So much has changed.

“My glasses are part of my identity,” says Saul. Although Saul says she wears only six of the pairs regularly, she won’t let any of them go.

“I love the other 14 frames enough not to pitch or donate them, even if the prescriptions are out of date,” says Saul. “You never know when it will be time to get them new lenses and wear them again!”

Expressing herself through frames

Among Saul’s most prized glasses are a pair that are burgundy with orange accent, German frames made of green resin which has mottled gracefully over time, and an especially elaborate turquoise and gold pair.

She doesn’t stick to one style, preferring to select from a wide array of shapes and colors.

“Unique frames are a way to express myself,” says Saul, who enjoys the reactions she gets from her glasses.

“I went to an event for the design museum and a man came up to me because of my glasses,” she says. “He turned out to be fascinating, and if I didn’t have my cool glasses on we never would have met.

“It’s a rare day when someone doesn’t stop in their tracks to offer a compliment or ask where on Earth I got them,” Saul adds.

“I’m pretty sure they are from the 1950s,” she says of the cat eyes. “The frames are tiny, and made from a bronzy gold metallic plastic, and are embedded with rhinestones. I even got a dress to match them.

“Their vintage quality gives an artsy look that appeals to me,” Saul says. “I want to keep the creative side of me visible. When I get dressed, I’ll often start with my glasses and then fit the clothes around them.

“You could say it’s part of my job,” Saul says. “Being in the creative field, people expect me to look a certain way.”

One of the reasons Saul values variety in her frames is that she doesn’t have pierced ears.

“My glasses are enough,” she says. “I use them as jewelry, and they’re my favorite fashion accessory! In fact, my glasses are probably more expensive than most people's jewelry.”

“It’s not just the frames that cost so much,” she says. “Those can be in the $400 to $800 range, but the lenses make up the rest of the price. My prescription is super expensive. I have the beginning of cataracts, and I'm a fan of progressive lenses.”

Saul has tried far less pricey pairs of glasses, but she says she finds them heavy and not terribly comfortable. Her most recent pair are light as air, which is the way she likes them.

Shopping for the perfect glasses

Saul’s approach to her annual frame shopping event is to enter with both hue and construction in mind.

“I’m an architect so it needs to have structure,” she says. “Yes, colorful, but they can’t be too whimsical because I also need to project professionalism. I have to admit, though, that my newest pair are kind of Elton John!”

After identifying the frames she wants, she often has second thoughts, so she waits and thinks about it before making the final decision.

“I’ll typically go back and get them,” Saul says. “I don’t put pressure on them having to be perfect. I know they’ll be perfect for something, and that’s good enough for me.”

Since Saul has so many precious pairs of eyeglasses, she makes a point of taking good care of them.

“I have beautiful, oversized cleaning cloths that are decorated with gorgeous patterns,” Saul says. “And I line my glasses up according to which I most recently purchased, which helps me stay organized.”

And what happens when she has to hit the road for a business trip or a vacation?

“I always travel with at least three pairs of glasses,” Saul says. “Fashion demands and fear of losing them means that they are always in my purse or carry-on. And on my face, of course!”

READY TO SHOP FOR YOUR OWN GLASSES? Find an optical store near you or online.