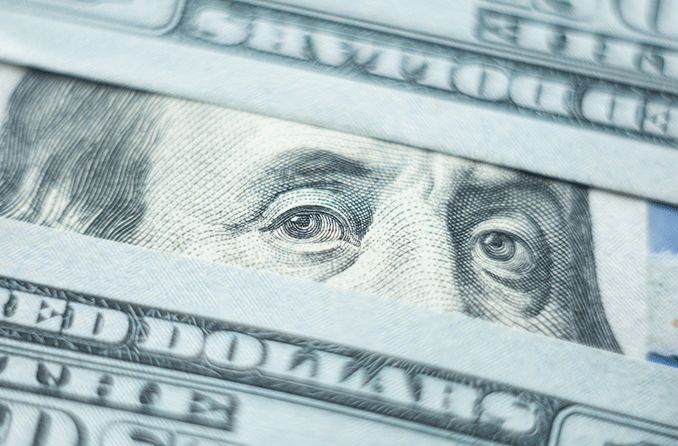 If you closed your eyes and pointed to a random spot in the United States, you could expect an eye exam to cost $106 in 2022, according to our recent survey of 100 U.S. eye doctors.

That’s $11 more than it was in January 2020, when we talked to the same eye doctors. Shortly after that, COVID-19 locked everyone in their homes and out of their optometrists’ offices.

Here in 2022, eye exams are looking like their pre-pandemic selves. But now we’re up against a new foe: sky-high inflation.

Are eye exams getting just as expensive as everything else? Our research says yes — at the exact rate of inflation.

But the U.S. is an enormous country, filled with one-street towns, mega metropolises and everything in between. In these cities, you could have as many as hundreds of different options for your next eye exam.

How does it all factor in?

The factors that influence exam prices

You’re overdue for an annual eye exam — where do you go?

Do you drive to a wholesale club optical center or call the eye doctor who’s had a private practice for decades? Or instead, maybe you’ll stop by that chain eyeglass shop next time you’re at the mall.

Where you schedule your eye exam, along with a few other factors, could have a big impact on your receipt.

Here’s what you can expect based on: 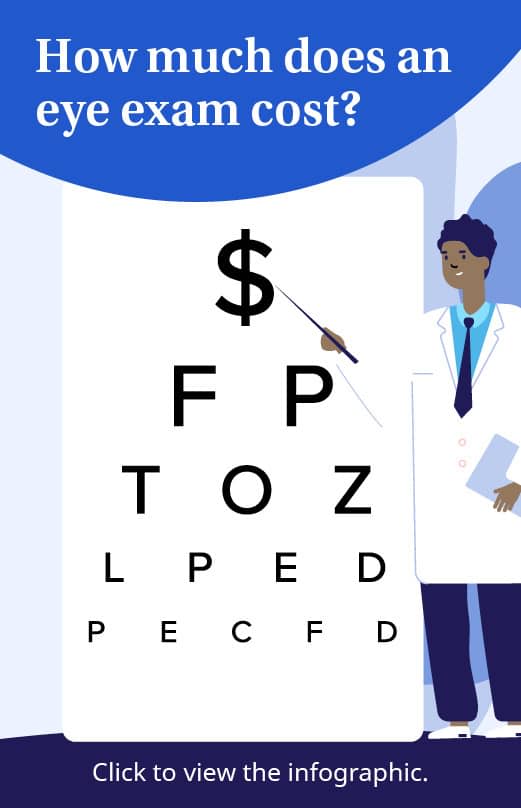 Check out this handy, illustrated summary of our findings!

Where you live in the United States still plays a big part in the price of your check-up.

The pandemic changed a lot of things, but it didn’t change the order of least to most expensive regions. What did change, however, was the gap between the least and most expensive areas.

Once again, big cities had the edge on small cities’ slightly pricier exams:

Cost of living is generally higher in big cities, but that still doesn’t apply to eye exams. Instead, big-city expenses will sneak up on you with things like housing and transportation.

Optometrists offer eye exams in all kinds of settings. We separated these into three categories: Vision centers (attached to a store like Target or Costco), optical retailers (like LensCrafters or Pearle Vision) and standalone private practices that aren’t affiliated with another company.

Their average exam prices were:

Vision centers and optical retailers are within a few dollars of each other, but there’s a big jump up to private practices. At $50 more for the average eye exam, private practices are 56% more expensive than retail locations.

Three eye exams at the average vision center or optical retailer still cost less than two exams at a standalone practice. Why?

Operating costs likely play the biggest part. When a doctor or group of doctors runs a standalone practice, things like rent for a bigger facility, total cost for more (or newer) equipment and eyewear inventory can add up in a hurry.

If someone has vision insurance with a set copay for eye exams, the price might not matter much anyway.

How much are eye exams in your area? Ask an eye doctor near you.

What were the lowest and highest priced exams?

If you had to guess the amount of money that separated the lowest and highest priced eye exams, what would you say — $50? $75? Maybe even $100?

That’s not a typo — an entire $245 separated the two extremes:

If you live on the West Coast, this might not come as any shock. But it will be a little hard to swallow if you live in one of the more moderately priced regions.

The six highest priced exams were in Washington, California, Hawaii and Alaska, all of which fell within the West and Northwest regions.

The ten lowest priced exams were all in the Midwest, Southwest or Southeast — with one straggler, an optical chain in Oregon.

There were a few surprises

A retail practice in Rhode Island charged $30 less for an eye exam in 2022 than they did two years ago. That seemed a little unusual in this era of mega-inflation.

Independent optometrists usually have most (or all) of the say when it comes to setting their exam prices, even when they practice inside or directly next to a chain store. In this case, the old optometrist probably moved out, and a new, cheaper optometrist moved in.

But not all practices made it through the pandemic.

Of the 100 locations surveyed pre-COVID, six were no longer in business in 2022:

It’s hard to say whether the three “missing” optometrists are part of a bigger trend or not. The shortage-mania of 2021 and 2022 might apply to ophthalmologists (medical eye doctors), but probably not optometrists.

Is this a sign of more eye doctors either starting their own practices or moving in with existing group practices? Or are more small-town eye doctors moving to bigger cities (or vice versa)? We don’t have that data yet, but time will tell.

Can anything else affect the cost of an eye exam?

Tests like refraction, dilation and retinal imaging are either lumped into the exam cost or billed separately. Make sure to ask about this beforehand, especially if certain tests aren’t covered by your vision insurance.

Both of these in-office tests let the optometrist see more of your retina, the thin layer of cells that lines the back of each eye. Retinal problems can cause irreversible vision loss, so the sooner any problems are diagnosed, the better.

Dilation uses special eye drops to temporarily widen your pupils, while retinal imaging takes a wide-angle photo of the retina without dilating your eyes. An eye doctor may recommend one test or the other, but not both.

If retinal imaging isn’t bundled into the exam, it might cost a little more — likely between $25 and $50.

Some of the staff members we spoke with told us about discounts for new patients or “cash” customers without vision insurance (self-pay). We included these discounts in the total cost when they were available.

Pricing was the most straightforward at vision centers like Target Optical or Walmart Vision Center. None of these locations mentioned discounts, but they did offer the lowest prices.

Like medical doctors, some private optometrists charge less for returning patients. Vision centers and retail locations tend to stick to the same fee, whether you’re a new patient or not.

If you’re considering a private practice you might use again in the future, ask if returning patients pay less for eye exams. It could help you decide where you schedule your appointment.

How to lower the cost of your next eye exam

If you have vision insurance, your total cost will probably be less than what you see here.

Vision insurance can be a great way to reduce your expenses, but you’ll need to pay a monthly premium to enroll. The amount will vary depending on your plan, insurance provider and employer, if you’re enrolling through your job.

Without insurance, there are still plenty of ways to save money:

What to know before you go

These survey results should give you a head start, but there’s only one way to find out how much an optometrist charges for an eye exam: Give them a call.

Some locations list their prices online, but it isn’t very common. If a fee is listed, it may not factor into the cost of additional tests.

Fortunately, most eye care practices are very open about how much they charge for an eye exam. Arm yourself with the right questions, and they’ll be happy to answer.

How much will your eye exam cost? Ask an eye doctor near you.

3. Business type. Businesses were classified as one of three types. 1. Private office: A locally owned practice not affiliated with secondary stores or brands. Practices were split evenly between single-doctor offices and group practices with two or more doctors. 2. Vision centers: Independent doctors who practice inside or next to a retail store. 3. Retail centers: National or regional chains that specialize in eye exams and eyeglass sales.

Eye exams: 5 reasons they are important

What’s the fastest way to get an eye exam?

Can I get an eye exam and glasses on the same day?

Where To Get a Free Eye Exam and Glasses