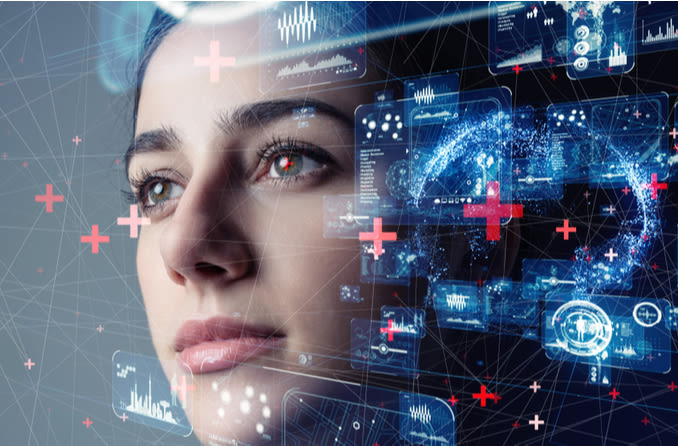 What if you could pop in your contact lenses and suddenly see in the dark? Or magnify distant objects with a squint? Or invite virtual assistants into your field of vision and power your new super eyes with every blink?

Where contact lenses revolutionized vision care in the 20th century, their high-tech successors — smart contacts — may soon change vision as we know it.

The history of smart glasses and contacts

Since 2013, when Google Glasses first brought the wireless connectivity and digital imaging we enjoy on our home computers and smartphones into the frames and lenses of our eyewear, high tech innovators have been busy on a parallel track, miniaturizing the same augmented reality (AR) functionality into contact lenses.

While early versions of smart glasses struggled for their nerdy appearance, smart contacts may start out en vogue. Consumers just need to experience the enhanced views being fashioned by Microsoft, Google, Samsung, Sony, Sensimed, Medella and Novartis, as well as global university medical programs and the U.S. Department of Defense.

Fashion and convenience aside, smart eyewear of both types initially grew out of the wearable technology movement. Their goal? Improve the health and vision of the estimated 253 million people worldwide living with the five most common forms of visual impairment: cataracts, diabetic retinopathy, macular degeneration, glaucoma and retinal detachment.

Ironically, it was the groundbreaking, eye-invasive work of Google spinoff Verily Life Sciences that helped lay the groundwork for a non-surgical (non-invasive) solution to these vision challenges.

The advanced smart lens movement got its start inside the eye by surgically removing and replacing existing lenses with electronic ones. In the procedure, doctors would inject fluid into the eye that enabled the artificial lens capsule to fuse in position and assume the job of focusing light on the retina, improving vision in a more dynamic way than the original organic lens could.

To power their electronic visual improvements, scientists inserted in the lens either miniaturized solar power, converting light into electrical power, or piezoelectric sensors, which harvest the mechanical energy of eye blinks in much the same way as wind turbines.

But if smart glasses were forced to battle a considerable nerd hurdle for public acceptance, surgically implanted smart lenses faced an even greater challenge: Who wants eye surgery, especially when it involves experimental electronics?

CAN'T WAIT FOR SMART CONTACTS? Order (or re-order) new contact lenses at an optical store near you or online.

One of the most jaw-dropping inventions of the Internet of Things, smart contacts can dramatically improve and expand eyesight with mini-micro versions of a whole range of tools, including batteries, antennae, auto-focus lenses, task-specific sensors, central processing units (CPUs), data storage, radios, cameras, wireless technology (such as Bluetooth), and, of course, one or both miniaturized power sources.

On the clinical side, scientists are experimenting with the medical potential of smart contacts, including:

Eye health monitor: Scientists in South Korea have developed the prototype for a new smart lens that, in theory, will be able to monitor eye health or help deliver medicinal eye treatments. Still in the early stages of research, it will be a while before this smart contact can be prescribed.

Diabetes: Researchers at Purdue University are using sensor tech inside smart contacts to measure the basal tears that keep our eyes moist in order to help diabetics monitor their blood glucose. If successful, the innovation could one day do away with the “finger-prick” test, in which diabetics routinely draw a drop of blood from their finger to monitor their blood sugar.

It’s worth noting here that Verily, in partnership with Alcon, put their glucose-sensing lens work on hold after finding a lack of correlation between their measurements of tear glucose and blood glucose in clinical studies.

Glaucoma: Sensimed has developed the Triggerfish wireless chip and miniaturized sensor that measures intraocular pressure, a modifiable risk factor for glaucoma. Kaunas University of Technology in Lithuania has also developed dissolvable contact lenses that can deliver drugs to the eyes of glaucoma patients.

Farsightedness: Researchers at the University of Wisconsin have used the unique shape of the retina found in elephant nose fish to design a contact lens that autofocuses in milliseconds, instantly correcting farsightedness. It’s estimated that globally, more than 1 billion people suffer from age-related farsightedness (presbyopia).

Cataracts: Despite the hold on their glucose-sensing lens, Verily and Alcon are still working to develop a “smart accommodating contact lens for presbyopia and a smart intraocular lens for improving sight following cataract surgery.”

Super new visual abilities beyond our wildest dreams are also being sewn into smart contacts, including:

Night vision: The U.S. Defense Department has teamed up with the University of Michigan to enable soldiers to see in the dark using thermal imaging. The technology uses a thin layer of carbon atoms called graphene to access the full spectrum of light, including ultraviolet.

Telescopes: The Swiss Federal Institute of Technology in Lausanne has developed telescopic contact lenses that enable the user to switch between normal and magnified vision, a feature that could be extremely beneficial to people with macular degeneration.

Photography: Samsung and Sony have both been granted patents for contact lens models that feature built-in cameras and sensors controlled by blinking. The sensors can tell the difference between voluntary and involuntary blinks.

Augmented reality: Samsung and others are exploring ways to project virtual images directly onto the eye via Google Glass, creating a mixed-reality experience that’s especially helpful in navigation. This feature could greatly enhance the close-point work of surgeons and emergency personnel.

Sight selection: The Ulsan National Institute of Science and Technology (UNIST) in South Korea has developed a contact lens that isolates the miniaturized technology components into transparent islands that can move around the eye’s surface.

Blink/solar power: Sony has applied for a patent on a smart contact that converts eye blinks into electrical power, while Novartis has been granted a patent on solar-powered smart lenses.

Archival storage: Another Sony patent allows lens users to store images and video they record through their smart contacts. This feature, along with facial recognition programming, could replace body cameras, making life safer for those serving in the military and police.

Pretty eye-opening stuff, right? So when might we peer into the future of sight with our own pair of smart contacts? And how much might they cost?

While there’s no clear picture yet on either front, the medical monitoring models are most likely to hit the market (quite appropriately) in 2020, with multifocal models to follow.

As for consumer cost, not much has been said. The Canadian startup Medella claims that their glucose-monitoring model will cost roughly $25 per contact lens to create, while Verily’s public disclosures state their medical model will cost between $200 and $300 per lens to produce.

The global smart contact market is expected to reach $7.2 billion in 2023.

All of which allows each of us time to ponder: How much is a new look at life really worth?