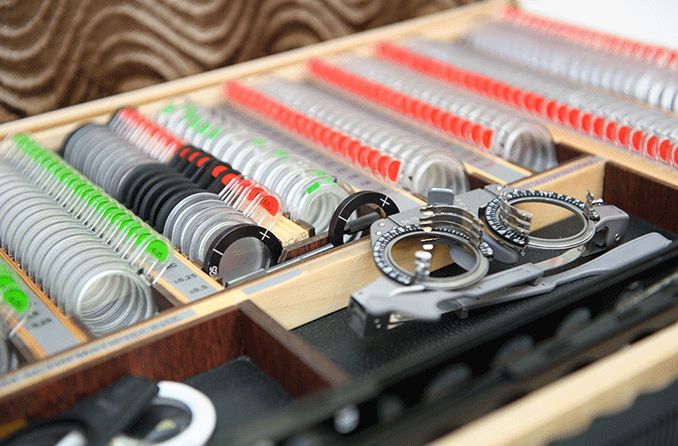 Nearsighted people wear glasses with concave lenses to correct their vision. A concave lens corrects myopia by being thinner at the center and thicker at the edge. It diverges light rays entering the eye so they focus a little further back, landing directly on the retina instead of in front of it.

What makes a person nearsighted?

Nearsightedness (myopia) is when you can see clearly close up, but distance vision is blurry. Incoming light rays come to a focus in front of the retina rather than on it, resulting in a blurry image.

Myopia can be classified as:

Axial myopia — Due to eye elongation, the distance from the cornea to the back of the eye (the axial length) has become too long. This type of myopia is more common.

Refractive myopia — Due to a too steeply curved cornea and/or a lens. It can also be caused by the lens being too close to the cornea. This results in too much focusing power. This type of myopia is less common.

Both of these conditions result in the image coming to focus in front of the retina instead of on the retina.

How does light get refracted in the eye?

When light rays enter the eye, they are bent, or refracted, as they pass through the eyeball so they will come to a sharp focus directly on the retina (in the back of the eyeball). Sharply focused light rays on the retina create a clear image for the brain to process.

Most of the focusing power of the eye comes from the cornea and lens. When you look at an object, the light rays from the object enter the eye, first passing through the cornea. The curvature of the cornea is most responsible for bending the light as it enters the eye.

If there is no refractive error (emmetropia), the eye’s refractive mechanism is able to land light rays, regardless of whether they are parallel or diverging, sharply at a focus on the retina.

In myopia, parallel light rays from distance objects come to a focus before reaching the retina, resulting in a blurry distance vision. This is because the eyeball is too long (axial myopia) or your cornea and lens contribute too much focusing power (refractive myopia).

Near vision remains clear in myopia because the light rays coming from near objects are more diverged. This causes them to come to a focus further back in the eyeball, landing directly on the retina.

Concave lenses are referred to as “minus lenses.” They are thinner at the center and thicker at the edge and diverge light.

In concave lenses, the thick base is at the edges so incoming light is bent outwards, or diverged.

What does it mean to diverge light? Think back to the prisms that you may have seen in science class. Remember how they moved the image that you were looking at? The image moved because prisms bend, or refract light, toward their thicker base.

A concave lens is similar to two prisms that are touching at the thinnest point. This creates a lens that is thinner at the center and thicker at the edges — a concave lens.

Light is always bent toward the base in a prism. In the case of a concave lens, the thick base is at the edges so incoming light is bent outwards toward the edges of the lens, or diverged.

Concave lenses diverge light rays, causing them to focus further back and land on the retina

For the purpose of understanding how a concave lens can diverge light to correct nearsightedness, we can think of myopia as the eye having too much convergence of light.

We know that myopia is usually due to an eyeball that is too long (axial myopia), but it is easier to think of it as too much convergence (refractive myopia).

The correction for a little too much convergence is — a little extra divergence. For this reason, concave lenses, which diverge light, are used to correct myopia.

Concave lenses (aka, minus lenses) that diverge light rays as they enter the eyes cause the light rays to come to a focus a little further back, landing directly on the retina. This provides a clear image for the brain.

The more concave the lens, the more the light is diverged. So a higher minus lens is used for higher myopia because more divergence of light rays is needed.

This is how a nearsighted person who puts on a pair of glasses with the correctly prescribed concave (“minus”) lenses will find that the world magically comes into crisp focus.

A guide to atropine eye drops for myopia control

Can eating carrots improve your eyesight?

Is it possible to reverse myopia?