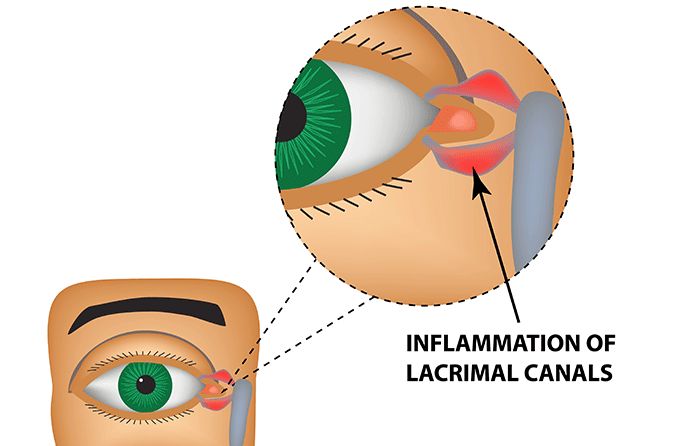 It’s often unilateral, which means it only affects one eye. So, it is unlikely that someone would have canaliculitis in both eyes at the same time.

Canaliculitis makes up only about 2% to 4% of lacrimal (tear-related) disease cases. It’s more common in females than males and has been shown to occur in people ranging in age from 5 to 90. The average age of patients, however, is around 65.

Canaliculitis is caused by an infection of the lacrimal canaliculus, the tear ducts and canals. This infection is usually the result of bacteria, but fungi and viruses have been known to cause it as well.

The most common cause of secondary canaliculitis is punctal plugs, which are often used as treatment for dry eye. One study found a 6% rate of canaliculitis occurring in patients who received SMARTPlugs. However, the actual rate may have been even higher since a number of patients did not return for follow-up visits in the years following plug insertion. The average time between plug insertion and canaliculitis symptom development is around three years.

A possible reason that canaliculitis is seen more often in women than men is the hormonal shift undergone during menopause. This shift can lead to decreased tear production that results in lower protection against infection in the eyes.

There’s another theory that the use of eye makeup may increase infection risk, as it can obstruct the tear duct and introduce bacteria, leading to increased bacteria production.

Canaliculitis has a variety of symptoms that vary from person to person. The most common symptoms are:

Other symptoms of canaliculitis include:

Symptoms that may occur as a result of secondary infection by punctal plugs include:

Due to its rarity and variety of symptoms, canaliculitis is frequently misdiagnosed, most commonly as:

Because misdiagnosis happens so often, it is not uncommon for the disease to go years without proper treatment. If you suspect you might have canaliculitis, however, a review of your symptoms and a clinical examination by an eye doctor can lead to a correct diagnosis.

Your eye doctor may order additional tests to diagnose your condition, including:

Non-surgical treatments exist for canaliculitis, but usually aren’t enough to get rid of the infection entirely. Surgery followed by medication is thought to be the most effective method of treatment.

These treatments are not one-time cures, and the infection often reappears again later. However, there are cases where these treatments may eventually resolve the condition completely.

If non-surgical treatments are unsuccessful, an operation called a canaliculotomy may be necessary to open up the blocked duct and canal.

If you experience any eye pain or discomfort for a prolonged period of time, you should schedule an appointment with your eye doctor. A thorough evaluation of symptoms and a comprehensive eye exam can lead to proper diagnosis and treatment.

It is also important to see your eye doctor for a follow-up assessment if you had punctal plugs inserted in the past three to five years.

READ NEXT: What is dacryoadenitis?

Canaliculitis: Are we missing the diagnosis? Oman Journal of Ophthalmology. October 2009.

Clinical features and bacteriology of lacrimal canaliculitis in patients presenting to a tertiary eye care center in the Middle East. Saudi Journal of Ophthalmology. October 2013.