All glaucoma surgery procedures (whether laser or non-laser) are designed to accomplish one of two basic results: decrease the production of intraocular fluid (

aqueous humor
or increase the outflow (drainage) of this same fluid. Occasionally, a procedure will accomplish both.

Currently the goal of glaucoma surgery and other glaucoma treatment is to reduce or stabilize intraocular pressure (IOP). When this goal is accomplished, damage to ocular structures — especially the

optic nerve
— may be prevented.

When Is Glaucoma Surgery Needed?

Most cases of glaucoma can be controlled with one or more drugs, but in some cases surgery may be either preferred or more effective. Sometimes, surgery can eliminate the need for glaucoma eye drops. But this is not always the case. 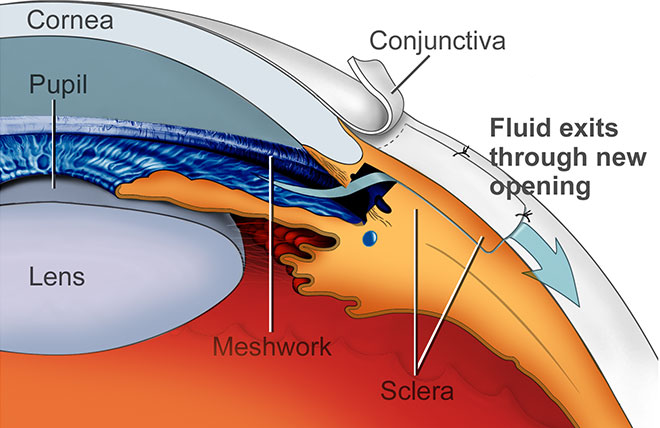 Some recent studies indicate that a laser procedure known as selective laser trabeculoplasty (SLT) may be equally as effective as glaucoma eye drops for lowering internal eye pressure. This laser surgery might be considered a primary treatment, particularly for people who find it difficult to comply with the strict, regular schedule needed for administering eye drops.

Another procedure called a trabeculectomy creates an artificial drainage area. This method is used in cases of advanced glaucoma where optic nerve damage has occurred and the IOP continues to soar. A third common option is a shunt, a device that a surgeon implants in your eye to improve fluid drainage.

To increase outflow of internal eye fluid, an ophthalmologist performs laser trabeculoplasty with a laser that creates tiny holes in the filtration

angle
of the eye, where the cornea and iris meet.

Laser trabeculoplasties are usually performed as an adjunct to a patient's ongoing eye drop therapy.

Studies are now investigating whether SLT could be used routinely as a first-line therapy for treatment of open-angle glaucoma and other types of glaucoma, even before eye drops are used.

A trabeculectomy creates a "controlled" leak of fluid (aqueous humor) from the eye, which percolates under the conjunctiva. A small conjunctival "bleb" (bubble) appears at the junction of the cornea and the sclera (

limbus
) where this surgically produced valve is made.

A trabeculotomy is the same as a trabeculectomy, except that incisions are made without removal of tissue.

A goniotomy typically is used for infants and small children, when a special lens is needed for viewing the inner eye structures to create openings in the

In an iridotomy, a laser is used to create a hole in the iris to enhance the drainage passages blocked by a portion of the iris.

An iridectomy involves surgically removing a small piece of the iris that will allow a better flow of fluid in eyes with narrow-angle glaucoma.

Shunts And Implants For Glaucoma

Glaucoma shunts and stents are small devices that are surgically inserted into the eye to increase outflow of intraocular fluid and reduce high eye pressure. The devices create an alternative passageway for the aqueous to escape from the eye, bypassing the eye's damaged or clogged filtration drainage canals. 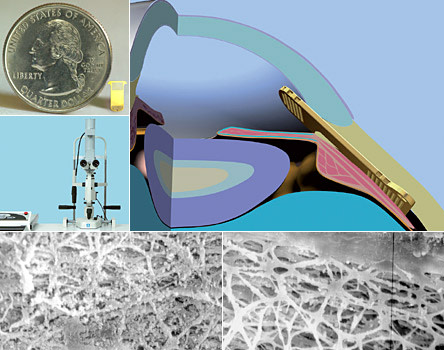 SOLX DeepLight Glaucoma Treatment System combines a titanium sapphire laser with a gold shunt (shown top left next to a quarter and right inserted into an eye). At lower left and right are a patient's trabecular meshwork before and after treatment.

Shunts and implants that have gained

FDA
approval for glaucoma surgery in the U.S. or that currently are in clinical trials include: 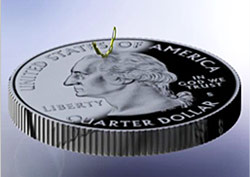 The Hydrus Microstent is about as small as an eyelash. (Image: Ivantis)

SEE ALSO: Can I Have Cataract Surgery If I Have Glaucoma? >

Various innovative surgical techniques alter the eye's drainage channels, improving the flow of fluids with only minimal penetration into the eye.

Watch this video that explains what glaucoma is and who is at risk for the disease. (Video: National Eye Institute)

These surgical methods involve superficial incisions that do not penetrate the eye as deeply as, for example, a trabeculectomy. Proponents say fewer complications are likely to result from these less invasive procedures.

A deep sclerectomy involves a minimally invasive incision into the white of the eye (sclera), a portion of which is removed to create a drainage space for relief of eye pressure.

A new surgical method known as viscocanalostomy creates an opening for insertion of a highly pliable, gel-like material known as viscoelastic, which helps provide enough space for adequate drainage and eye pressure relief.

The Future Of Glaucoma Treatment

Glaucoma specialists have differing viewpoints about the use of drug, laser and surgical intervention to control high IOP.

Some glaucoma specialists, for example, say that long-term costs of drug treatments involving eye drops can be an economic burden that may be offset with the use of laser treatments.

Others argue that treatments such as eye drops are far less invasive, are generally effective and have fewer risks of complications than laser or non-laser surgical approaches. Study results comparing long-term effectiveness of different treatments also vary.

One-year study results show reduced medication use, IOP after microstent placement. Ocular Surgery News. November 2012. Comparison of trabeculectomy and Ex-PRESS implantation in fellow eyes of the same patient: a prospective, randomised study. Eye. February 2012. "Medications or Laser: Which One Is Best for Your Patient?" presentation by Barbara A. Smit, MD, PhD, Spokane Eye Clinic in Spokane, Wash., at the 2007 American Society of Cataract and Refractive Surgery conference in San Diego.