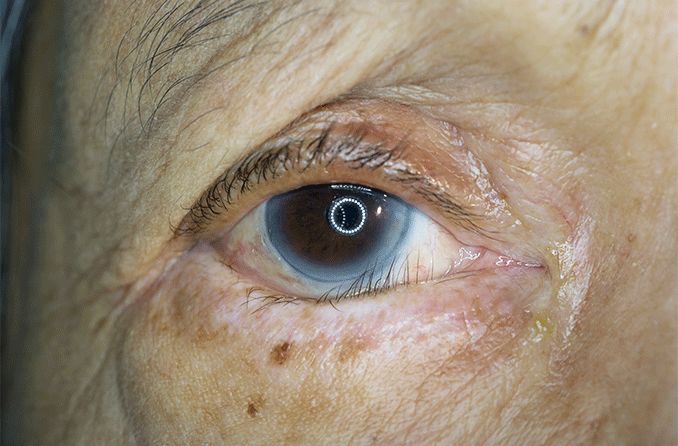 Entropion is a condition that causes the lower eyelid to fold inward so that the eyelashes and skin touch the surface of the eye. It is commonly caused by weakened muscles in the eyelid due to aging and can cause eye redness, pain and excessive tearing. Entropion can be treated by taping the eyelid, applying eye lubricants and having surgery.

Entropion, whether due to age, scarring, congenital defect or inflammation, causes the lower eyelid and eyelashes to turn inward and rub against the eye, causing discomfort and irritation. The eyelid may turn inward constantly or only when the eyelids are squeezed shut.

The entropion eye condition can injure the cornea and eventually lead to vision loss. Entropion usually affects only one lower eyelid, but it can occur in both lower eyelids.

Other types of entropion include:

Symptoms of entropion include:

A short-term solution for entropion is the use of skin tape, an adhesive made specifically for the skin. At night, apply a small piece of tape vertically to the cheek to pull the lower eyelid down enough so that it does not turn inward while asleep. It is important to ask your eye doctor for clear instructions before attempting this home treatment.

Other temporary remedies that may relieve discomfort include:

If these remedies don’t improve the symptoms, your eye doctor may recommend surgery. If the surgery is related to the muscles and tendons sagging due to age, the surgeon will remove a small part of the lower eyelid, leaving stitches below the eyelid or in the corner of the eye.

If there is scar tissue inside the eyelid, whether from a previous surgery or injury, the eye doctor may perform a skin graft.

Prior to surgery, a local anesthetic will numb the eyelid and surrounding area, and you will be sedated. Once the surgery is completed, your eye doctor may prescribe an antibiotic and steroid ointment to apply to the eye for one week. An eye patch may also be recommended for the next 24 hours in order to properly protect the eye. Stitches are usually removed within a week of the surgery.

Cold compresses are helpful in relieving the normal, temporary swelling and bruising that will occur and should only remain for about two weeks after surgery. As the eyelid heals, any tightness or discomfort should subside.

While the conditions have opposite effects on the eyelid, the symptoms of ectropion are similar to entropion and include:

Both eye conditions can be caused by weakened eye muscles due to age, eye infections, a congenital disorder, inflammation and scar tissue. Treatment options are similar for both entropion and ectropion.

If you notice any changes in your vision or think you might be experiencing entropion symptoms, call your eye doctor immediately. Regardless of your vision needs or presumed eye health, it is recommended that you keep up with routine eye exams to maintain a healthy vision system and manage your overall health.

Milia on your eyelid? What milia are and how to remove them