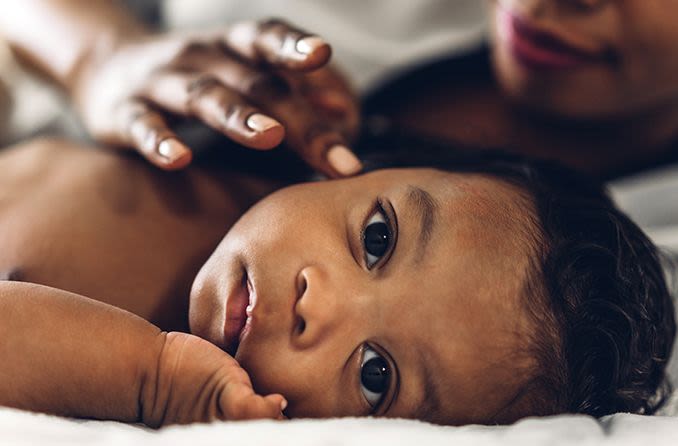 In a healthy eye, fluid filters in and out as needed, maintaining a balanced pressure inside the eye. Sometimes the fluid doesn’t flow properly though, leading to a build-up of eye pressure called glaucoma. In children, this is known as developmental glaucoma.

This can happen at any age for many different reasons, although its occurrence is rare in children. Developmental glaucoma can happen on its own or as the result of a secondary condition.

Increased eye pressure can damage the optic nerve, the pathway the eyes use to send visual information to the brain. When the optic nerve is damaged over time by untreated glaucoma, irreversible vision loss can occur.

Thankfully, there are multiple forms of glaucoma treatment that can be used to reduce or remove the risk of vision loss from glaucoma. For many types of the disease, starting treatment early can lead to positive lifelong results.

When glaucoma occurs in children, intraocular pressure inside the eye is too high, due to a build-up of fluid. A child can either be born with glaucoma or develop it later. Developmental, pediatric or childhood glaucoma usually refers to the latter — developing after birth.

The symptoms of developmental glaucoma can include:

Developmental glaucoma can occur in one eye or both eyes, and can be either primary glaucoma or secondary glaucoma:

NEED A PEDIATRIC EYE EXAM? Find an eye doctor near you and schedule an appointment.

How is developmental glaucoma diagnosed?

Childhood glaucoma can be diagnosed with a series of tests. These tests will not only determine vision quality, but the physical structure and function of the eye as well.

In addition to a standard vision test, an eye doctor will likely dilate the pupils to look inside the eye, test peripheral vision and use a tonometer to test intraocular pressure.

If a child is diagnosed with glaucoma, an ophthalmologist will discuss his or her treatment options. These will vary based on the child’s age, cause of glaucoma and how far it has progressed, along with other factors.

Treatment can be as simple as medication, either in the form of eye drops and/or oral medication, but may also require surgery. There are several surgical options a specialist can suggest, some of which are minimally invasive and use lasers or tiny incisions.

Congenital glaucoma has already developed or started to develop when a child is born. While it can affect one eye, it’s more commonly seen in both eyes.

Parents may notice the following symptoms of congenital glaucoma in their child:

NEED TO GET YOUR CHILD'S EYES CHECKED? Find an eye doctor near you to make an appointment.

How is congenital glaucoma diagnosed?

Since diagnosis is rare — about 1 in 10,000 live births — and can be easily overlooked or mistaken for another disorder, only around 25% of babies with congenital glaucoma are diagnosed at birth, according to the American Academy of Ophthalmology.

Most congenital cases are diagnosed by a child’s first birthday and almost all cases will become evident before age 3, in which case it’s referred to as infantile glaucoma. If the condition appears and is diagnosed after age 3, it’s called juvenile glaucoma.

Treatment for congenital glaucoma can be similar to that of developmental glaucoma, but often requires some form of surgical intervention. Eye drop and/or oral medication may still be required after a successful surgery.

An ophthalmologist, optometrist or pediatrician can examine your child’s eyes and point you in the right direction. With timely diagnosis and treatment, a child can live a normal, healthy life with the best possible quality of vision.