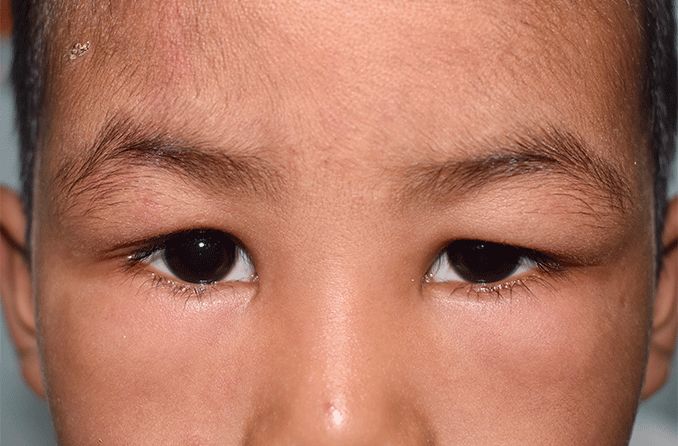 Swollen eyelids from excess fluid buildup (edema) can occur for several reasons, such as allergies, infections or injuries. They can also be a sign of blepharochalasis, a rare condition diagnosed in fewer than 200,000 people in the U.S.

Blepharochalasis can result in functional issues, such as obscuring vision, or cosmetic concerns, like bagginess.

Blepharochalasis is a rare disorder, and its cause is unknown. Genetics or heredity may be considered risk factors when it comes to blepharochalasis, in that they don’t directly cause the disorder but may increase the chances of developing it.

In light of no specific causes or risk factors, there are some possible triggers — things that may precede an eyelid edema attack — that may shed some light on why blepharochalasis occurs. These triggers include but are not limited to:

Signs and symptoms of blepharochalasis

An obvious outward sign of blepharochalasis is swelling in which fluids accumulate in and around the eyelid tissues. When poked, the affected skin doesn’t leave an indentation (called non-pitting edema).

These recurrent attacks of exacerbation followed by remission can take a toll on eyelid skin, leaving its appearance changed. Some signs and symptoms of blepharochalasis include:

If you present any of these signs and symptoms, or if they persist, worsen or change, it’s important that you visit your eye doctor.

Here are the characteristics of each:

Blepharochalisis refers to episodic attacks of eyelid edema. The eyelid is temporarily swollen by the accumulation of fluids, and after several repeated episodes, it becomes stretched, wrinkly and/or discolored. Other than swelling, blepharochalasis tends to not have other classic characteristics of inflammation such as pain or redness. Treatment involves surgery called blepharoplasty.

Dermatochalasis is a condition that results in excess eyelid skin caused by a decrease in elastin, a protein in connective tissues. Upper and lower eyelids can become permanently saggy, and over time, this redundant skin can be noticeable, especially in older people. If poked or stretched, the affected skin doesn’t snap back easily. Dermatochalasis is treated by blepharoplasty.

Blepharitis involves eyelid swelling from clogged oil glands found along the rim of the eyelid near the eyelashes (meibomian glands). A common affliction, it’s due to bacterial infection or allergies. During a bout, the affected eyelid skin is inflamed and may be associated with pain, redness, itchiness, tearing or stinging. Treatment comes in the form of self-care, such as using lubricating eye drops or antibiotic ointment, as recommended by an eye doctor.

Blepharochalasis can’t be prevented or cured. However, it can be treated by blepharoplasty. As with all eye issues, early diagnosis and treatment are the best courses of action.

With blepharochalasis, sight itself is not affected; however, as a result of repeated edema episodes, the eyelid may undergo changes that only surgery can correct.

Changes in eyelids due to blepharochalasis — obscured vision or eye irritations — may require surgery to correct. If deemed medically necessary for functional reasons, insurance may cover, or partially cover, these procedures.

Surgery can also correct appearance-related issues that may cause premature aging concerns, such as bagginess, discoloration or spider veins. If considered cosmetic or elective, insurance may not cover it.

Blepharoplasty may reduce or eliminate functional or cosmetic issues that occur because of the edema attacks. Typically, surgery for blepharochalasis is scheduled while the eyelid is in the remission stage.