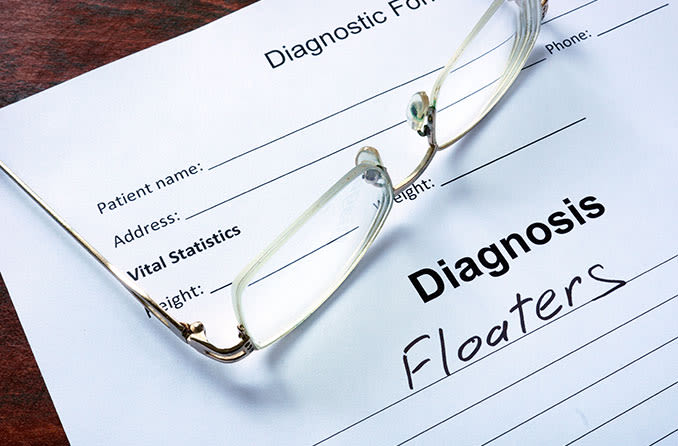 What are eye floaters?

Eye floaters are tiny clumps or fibers of collagen (protein) that are suspended and move around within the gel-like fluid inside our eyes called the vitreous humor. When these bits of collagen float close to the back of the eyeball, they cast shadows on the retina. These shadows are what are perceived as “floaters.”

They usually look like transparent, squiggly lines or tiny moving dots that slowly float across your field of vision. They often have the appearance of visual “cobwebs.”

Floaters are more noticeable when you’re looking at a bright area with one color, like a white wall or a clear blue sky. Since the vitreous humor shifts when you move your eye, floaters will appear to move away as soon as you try to look at them.

Usually not. Eye floaters can point to a potentially dangerous underlying condition, but more often than not, they’re harmless.

Most eye floaters occur as people age, or as the result of common conditions like nearsightedness.

In rarer cases, floaters can signal a serious eye infection, injury, retinal detachment or  inflammation (uveitis) or bleeding inside the eye. These conditions can potentially threaten your eyesight and should be treated as a medical emergency. Older people and those with certain underlying conditions, like diabetes and previous cataract surgeries, can be more at risk for these complications.

So, should you worry about eye floaters? Probably not, but since they can point to a serious problem, try to avoid self-diagnosis. If you notice new or a sudden increase in floaters — especially if the floaters are accompanied by flashes of light — see an eye doctor immediately.

Most of the time, eye floaters simply appear as we age or for no obvious reason at all. When this happens, they aren’t generally a sign of any larger illness or condition.

But in some cases, they can be a sign of an underlying condition. These can include eye infections, injuries, retinal detachment, uveitis and hemorrhaging, along with others. Many of these are serious problems that require emergency treatment. They often occur with other symptoms alongside floaters, but not always.

Some conditions are believed to cause floaters, when in fact, they do not.

High blood pressure (hypertension) is one such condition. Untreated high blood pressure can cause problems with the optic nerve, but it does not directly cause eye floaters, according to the American Heart Association.

Multiple sclerosis (MS) can cause various eye-related symptoms, such as eye pain on movement and difficulty focusing, but eye floaters are not one of them. Rarely, MS can lead to uveitis, according to the American Academy of Ophthalmology. Uveitis symptoms can include eye floaters, along with pain, light sensitivity, vision problems and eye redness.

While floaters are not a sign or symptom of cataracts, they can develop or become more noticeable after cataract surgery. Additionally, cataract surgery will not remove existing floaters.

After you first notice them, floaters often become less noticeable over time, In part, this is because as the vitreous continues to liquify with age, suspended floaters tend to move out of view. Also, floaters can be annoying at first, but most people get used to them as time goes on — only noticing them on a clear, bright day or under similar conditions.

While certain home remedies have been suggested, the only effective treatment for floaters is to remove them with a laser procedure called laser vitreolysis or an eye surgery called a vitrectomy. Because laser vitreolysis is less invasive and has fewer risks, this is the preferred treatment for common (but large and persistent) floaters.

What causes flashes of light in the corner of your eye?

Most flashes in vision are caused by one of two things:

How are eye flashes and eye floaters different?

Floaters are caused by bits of protein in your vitreous that cast a shadow on your retina, whereas flashes are a neurological sensation caused by traction (or pulling) on the retina.

While they both usually relate to the vitreous fluid, eye flashes are simply the way your brain perceives a stimulus inside your eye.

Should I see an eye doctor?

If you develop new floaters or flashes, or notice a dramatic increase in them, see an eye doctor immediately to rule out a possible tear in the retina or a retinal detachment.

Also, have routine comprehensive eye exams — especially after age 40 — to make sure you are not at risk for serious eye health problems.

How to reduce eye floaters naturally