What does "short sighted" mean? 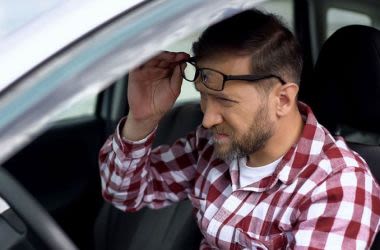 The word "shortsighted" is a common term used to describe myopia — the condition where it's impossible to see things clearly unless they are relatively close to your eyes.

A shortsighted person typically will be able to read a book or see a computer screen with ease but will have difficulty seeing things across the room, such as writing on a blackboard or whiteboard in a classroom.

A shortsighted eye generally is an eye that has grown too long, so light comes to a focus in front of the retina instead of directly on it. This error in focusing position (or refractive error) causes objects that are far away to appear blurry.﻿

But a shortsighted person usually can see objects up close without spectacles or contact lenses. (A person with shortsightedness is "short-sighted".)

In some parts of the world, people describe a shortsighted person as being "near-sighted." The two terms mean the same thing.

﻿ Shortsightedness is very common and its prevalence has been growing rapidly in recent years.

According to a report about myopia published by the World Health Organisation and the Brien Holden Vision Institute, myopia currently affects more than 2 billion people worldwide. If current trends continue, approximately half of the global population may be shortsighted by the year 2050, according to the report.

Uncorrected shortsightedness is a leading cause of vision impairment throughout the world, and high degrees of myopia (corrected or uncorrected) increase the risk of retinal detachment and other serious eye problems that can lead to blindness.

For these reasons, researchers are looking for effective ways to control the development and progression of myopia.

﻿ Currently, there is no cure for nearsightedness. But blurry vision caused by being shortsighted usually can be fully corrected with eyeglasses, contact lenses or refractive surgery (such as LASIK).

Spectacles are the most common treatment for myopia. For higher amounts of shortsightedness, high-index lenses reduce the thickness and weight of the glasses.

Contact lenses are available for virtually any amount of shortsightedness, even very high myopia.

Also, ortho-k contact lenses have been shown to slow the progression of shortsightedness in children. LASIK and other refractive surgery procedures should be considered only after shortsightedness has stabilised — generally, sometime after age 18.

To see if you or your children are becoming shortsighted, schedule a comprehensive eye examination with an eye doctor near you.