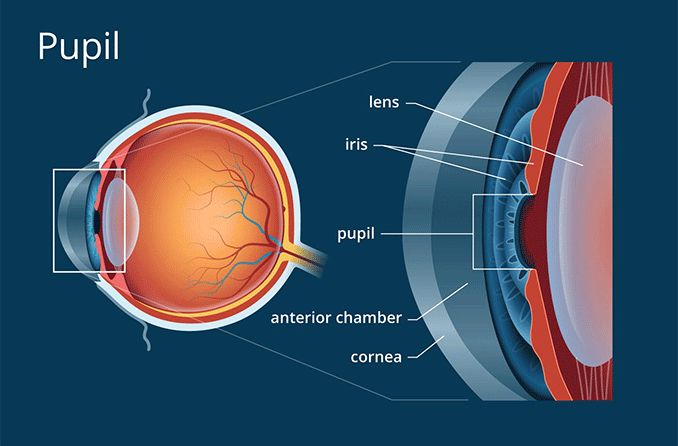 One of the most important parts of the eye isn't a structure at all — it's an open space. It's the pupil of the eye.

The pupil is the opening in the centre of the iris (the structure that gives our eyes their colour). The function of the pupil is to allow light to enter the eye so it can be focused on the retina to begin the process of sight.

Typically, the pupils appear perfectly round, equal in size and black in colour. The black colour is because light that passes through the pupil is absorbed by the retina and is not reflected back (in normal lighting).

If the pupil has a cloudy or pale colour, this is typically because the lens of the eye (which is located directly behind the pupil) has become opaque due to the formation of a cataract. When the cloudy lens is replaced by a clear intraocular lens (IOL) during cataract surgery, the normal black appearance of the pupil is restored.

There's another common situation when the pupil of the eye changes color — when someone takes your photo using the camera's flash function. Depending on the direction of your gaze when the photo is taken, your pupils might appear bright red. This is due to the intense light from the flash being reflected by the red colour of the retina.

Together, the iris and pupil control how much light enters the eye. Using the analogy of a camera, the pupil is the aperture of the eye and the iris is the diaphragm that controls the size of the aperture.

In addition to being affected by light, both pupils normally constrict when you focus on a near object. This is called the accommodative pupillary response.

During a routine eye exam, your eye care professional will inspect your pupils and test your pupillary function.

Typically, pupil testing is performed in a dimly lit room. While you are looking at a distant object, the examiner will briefly direct the beam of a small flashlight at one of your eyes a few times. While doing this, the response of the pupil of both eyes is observed.

Typically, the observer will then alternately direct the light at each eye and again observe the pupil responses of both eyes. This is called Marcus Gunn pupil testing, which is sometimes called the "swinging flashlight test."

The examiner may then turn up the room lights a bit and have you focus on a hand-held object while moving that object closer to your nose. This is a test of the accommodative response of your pupils.

If your pupils appear normal and respond normally, your eye care professional may record this popular acronym in your medical chart: PERRLA, which is an abbreviation for "pupils are equal, round and reactive to light and accommodation."

A pupil is abnormal if it fails to dilate in dim lighting or fails to constrict in response to light or accommodation.

Conditions That Affect The Pupil

A number of conditions can affect the size, shape and/or function of the pupil of the eye. These include:

Adie's tonic pupil. This is a pupil that has nearly no reaction to light (direct or consensual) and there is a delayed reaction to accommodation. Adie's tonic pupil (also called Adie's pupil, tonic pupil or Adie's syndrome) usually affects only one eye, with the affected pupil being larger than the pupil of the unaffected eye. The cause of Adie's pupil is usually unknown, but it can be caused by trauma, surgery, lack of blood flow (ischemia) or infection.

Argyll Robertson pupil. This is a pupil that is not reactive to light (direct or consensual), but reaction to accommodation is normal. Argyll Robertson pupil usually affects both eyes, causing smaller-than-normal pupils that do not react to light. The condition is rare and the cause is usually unknown, but it has been associated with syphilis and diabetic neuropathy.

Marcus Gunn pupil. Also called relative afferent pupillary defect (RAPD) or afferent pupillary defect, this is an abnormal result of the swinging-flashlight test where the patient's pupils constrict less (therefore appearing to dilate) when the light is swung from the unaffected eye to the affected eye. The most common cause of Marcus Gunn pupil is damage in the posterior region of the optic nerve or severe retinal disease.

Sexual arousal. Recent research has confirmed that sexual arousal elicits a pupil dilation response, and that this response may be useful in sexuality research to evaluate sexual orientation.

The eyes have it: sex and sexual orientation differences in pupil dilation patterns. PLoS One. August 2012.