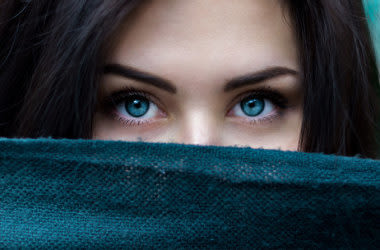 Among human beings, blue eyes are less common than brown eyes. This is one reason why blue colour contact lenses are popular.

Here are a few facts about blue eye colour you might not know:

1. All blue-eyed people may have a common ancestor

It appears that a genetic mutation in a single individual in Europe 6,000 to 10,000 years ago led to the development of blue eyes, according to researchers at the University of Copenhagen.

"Originally, we all had brown eyes," said Hans Eiberg, associate professor in the Department of Cellular and Molecular Medicine at the university and lead author of the study. "But a genetic mutation affecting the OCA2 gene in our chromosomes resulted in the creation of a 'switch', which literally turned off the ability to produce brown eyes."

Eye colour depends on the amount of a single type of pigment (called melanin) in the iris of the eye. This genetic switch, located in the gene next to the OCA2 gene, limits the production of melanin in the iris — effectively "diluting" brown eyes to blue.

So if blue eyes are the result of a genetic mutation in a single individual, how did the trait spread from just one person to being present in 20 to 40 percent of the populations of some European countries today?

One theory is that blue eyes were immediately considered an attractive feature, causing people to seek mates with blue eyes to have children with, enabling the genetic mutation to multiply.

As mentioned above, blue eye colour is determined by something called melanin. Melanin is a brown pigment that controls the colour of our skin, eyes and hair.

3. You can't predict the colour of your child's eyes

But geneticists now know that eye colour is influenced by as many as 16 different genes to some degree — not just one or two genes as once thought. Also, the anatomic structure of the iris can affect eye colour to some degree.

So it's impossible to know for sure if your children will have blue eyes. Even if you and your partner both have blue eyes, that's no guarantee your child's eyes will also be blue.

(Here's a royal example of the unpredictability of eye colour: Princess Charlotte, the young daughter of blue-eyed Prince William and green-eyed Kate Middleton, has blue eyes. But her brother, Prince George, has very brown eyes.)

The human eye does not have its full adult amount of pigment at birth. Because of this, many babies have blue eyes, but their eye colour changes as the eye develops during early childhood and more melanin is produced in the iris.

So don't be concerned if your child begins to lose that "baby blue" eye colour and their eyes become green, hazel or brown as they get a little older.

Melanin in the iris of the eye appears to help protect the back of the eye from damage caused by UV radiation and high-energy visible ("blue") light from sunlight and artificial sources of these rays.

Because blue eyes contain less melanin than green, hazel or brown eyes, they may be more susceptible to damage from UV and blue light.

Regarding connections between eye colour and eye diseases, research has shown darker iris colour is associated with an increased risk of cataract and a reduced risk of ocular uveal melanoma (a form of eye cancer), compared with blue eyes. But the same analysis of published studies failed to confirm any association of eye colour with increased risk of age-related macular degeneration (AMD).

Still, because many people with blue eye colour are sensitive to light and may have more risk of damage to their retinas from UV light, most opticians recommend that people with blue eyes should be extra cautious regarding their exposure to sunlight. And because eye damage from UV and blue light appears to be related to your lifetime exposure to these rays, wearing sunglasses that block 100 percent UV and most blue light should begin as soon as possible in childhood.

Photochromic lenses are another great way to protect blue eyes from UV radiation. These clear lenses block 100 percent UV both indoors and outside, and darken automatically in response to sunlight when you go outdoors so you don't have to carry a separate pair of sunglasses.

Also, adding an anti-reflective coating to photochromic lenses gives you the best vision and comfort in all lighting conditions (including driving at night) while showcasing your blue eyes with reflection-free lenses. AR coating is recommended for all types of glasses lenses — including single vision, bifocal and progressive lenses — to eliminate distracting reflections and allow people to see the beauty and expressiveness of your eyes.

Also, if you spend several hours a day using a computer, smartphone or other digital devices, it's a good idea to wear spectacles that shield your eyes from high-energy blue light when using these devices.

It may take many years before we know the risks associated with cumulative exposure to blue light from computers and smartphones, but many eye care professionals believe it's prudent to use caution when it comes to protecting your eyes from these devices — especially if you have blue eyes.

A final note about blue eyes you might find interesting: Research suggests that having blue eyes may increase your risk of alcohol dependency if you are a drinker. A study of European Americans with blue eyes found people with these characteristics had up to 83 percent higher odds of becoming dependent on alcohol, compared with matched controls who had darker eye colour.