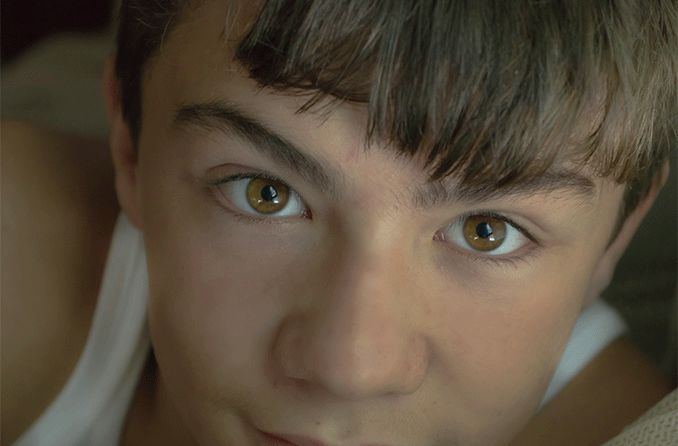 If you have amber eyes, you’re a member of a small global family, for you are blessed with one of humankind’s rarest eye colors (green eyes are considered the other most rare). Only an estimated 5% of people have an amber eye color.

However, it is more common in the animal kingdom: A number of animals commonly have amber colored eyes, including wolves, dogs, cats, eagles, owls, pigeons and fish. In fact, eyes this color are sometimes referred to as “wolf eyes.”

“Not quite dark enough to be brown and not quite light enough to be yellow, amber eyes have a reputation for taking many people’s breath away,” according to Woman’s World magazine.

What is amber eye color?

Rare amber eyes are a yellow-brown color, often described as having a golden or copper hue.

To understand the amber eye color, it may help to understand how eye color is determined in the first place. We’ll go into this a little more later, but here’s a preview to explain how eyes can appear amber:

The colored part of the eye is known as the iris. Melanin pigments contribute to the front layer of the iris, just as they contribute to skin and hair color. Melanin comes in two forms: eumelanin and pheomelanin. Eumelanin is brownish-black, while pheomelanin is reddish-yellow.

Amber borrows some of its color from eumelanin and some of the color from pheomelanin (also called lipochrome). It’s thought that amber colored eyes contain a high level of pheomelanin.

Amber is one of six eye colors. The others are blue, brown, gray, green and hazel. An amber eye color can occur in a spectrum of shades, from very dark amber to light amber eyes.

While there are only six eye colors, no two people have eyes that are precisely the same color… as with amber, all eye colors come in a vast spectrum of shades and blends.

Who has amber eyes?

People with amber colored eyes often have Asian, Spanish, South American or South African roots, as do people with brown eyes. People with blue, gray, green and hazel eyes are of European ancestry.

Which celebrities have amber colored eyes?

As such a striking eye color, it’s not surprising that there are a number of famous faces with amber eyes. Among the celebrities recognized for their amber colored eyes are Justin Bieber, Jennifer Lopez, Jennifer Garner, Nicole Richie, Darren Criss and Eliza Dushku.

Are amber eyes the same as hazel eyes?

Amber eyes are not the same as hazel eyes. The amber eye color is a mostly solid color, while hazel eyes have shades of brown and green.

How is eye color determined?

Sixteen genes help determine whether your eyes will be amber or any of the other six eye colors, with two of those genes playing a primary role.

Most of the genes connected to eye color have a role in producing, transporting or storing melanin. As noted by the U.S. National Library of Medicine, people with brown eyes have a large amount of melanin in the iris, while people with blue eyes have much less of this pigment.

“Researchers used to think that eye color was determined by a single gene and followed a simple inheritance pattern in which brown eyes were dominant to blue eyes. Under this model, it was believed that parents who both had blue eyes could not have a child with brown eyes. However, later studies showed that this model was too simplistic,” the Library of Medicine says.

“Although it is uncommon, parents with blue eyes can have children with brown eyes,” the Library adds. “The inheritance of eye color is more complex than originally suspected because multiple genes are involved. While a child’s eye color can often be predicted by the eye colors of his or her parents and other relatives, genetic variations sometimes produce unexpected results.”

This means that, while you may not have amber eyes, it is still possible for your child to “inherit” them.

Regardless of whether your eyes are amber or another color, your eyes will literally catch other people’s eyes.

“You may have heard about the effects of a large, dilated pupil on attractiveness. When people are aroused, their pupils, the black circle at the center of the eye, become larger. This signal of arousal is found attractive, particularly to men, but also to women, even when we don’t consciously notice it,” according to a 2017 article published by Psychology Today.

The article also points out that the white part of your eyes, known as the sclera, plays a role in whether someone thinks you’re happy, healthy and attractive.

In one survey, Americans rated gray as the most attractive eye color and brown as the least attractive eye color; the survey did not include questions about amber colored eyes. Those who responded to the survey found people with gray eyes to be intelligent, quiet and serious, while people with brown eyes were considered kind, reliable and patient.

“Rooted in primitive survival mechanisms, the human mind — and the human eye — tend to notice that which is different and unique,” Manly says.