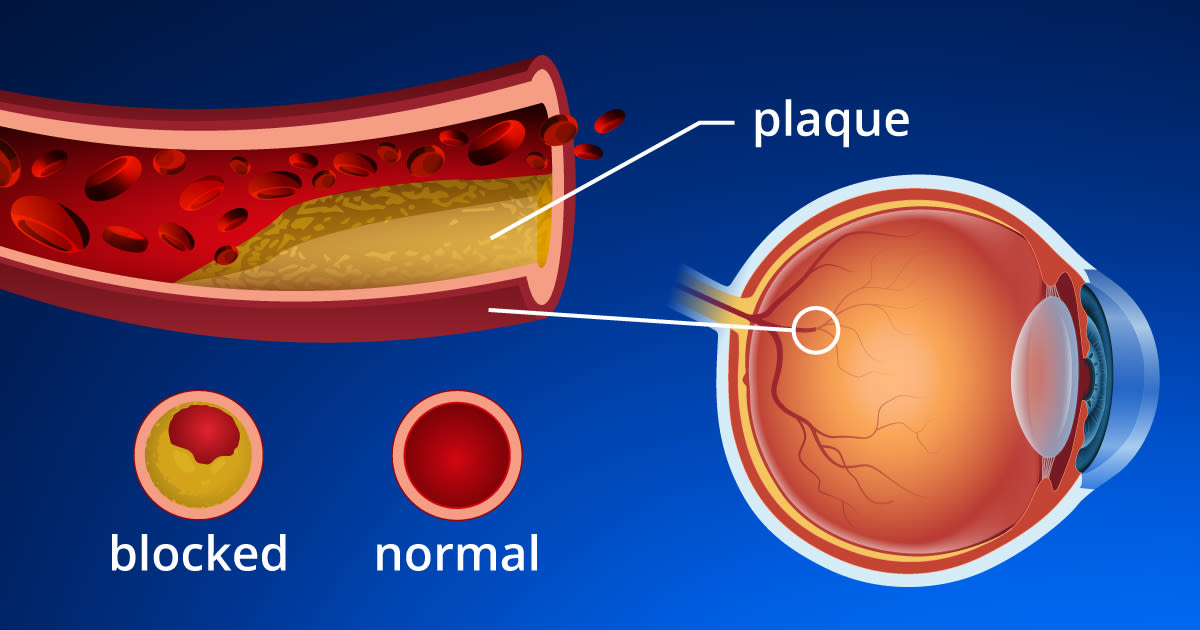 Eye strokes occur when blockages occur in blood vessels in the retina, causing vision loss. The severity of vision loss depends on the extent and location of the blockage (occlusion) and loss of blood flow.

Just as strokes occur in other parts of the body because blood flow is blocked, your eye also may suffer damage when vital structures such as the retina and optic nerve are cut off from nutrients and oxygen flowing through your blood.

If your eye care professional detects signs of an eye occlusion during your comprehensive eye exam, you'll also need medical care to determine if you have high blood pressure, artery disease, or heart problems that may be responsible for the blockage.

If a blockage is found, the type of retinal artery or vein occlusion you have is categorized by its location.

Central retinal artery occlusion usually occurs with sudden, profound but painless vision loss in one eye. Most people with CRAO can barely count fingers in front of their face or see light from the affected eye.

The condition may be preceded by episodes of temporary vision loss that last only a few seconds but may persist for several minutes.

CRAO is considered a "stroke" of the eye. Studies show that more than half of people who experience CRAO have underlying high blood pressure and 25% have significant carotid artery disease (plaque with narrowing of the artery lining), heart valve disease, or diabetes.

A German study found that previously undiagnosed cardiovascular (CV) risk factors were present in 78% of CRAO patients. The most meaningful unidentified risk factor was narrowing (stenosis) of the carotid artery on the same side of the body as the eye stroke.

Also, 11 of the 84 participants in the study (13%) had a stroke either prior to or within one month after diagnosis of CRAO. The study authors concluded a prompt, comprehensive, cardiovascular diagnostic work-up should be considered mandatory for all patients with central retinal artery occlusion.

Unfortunately, vision loss that already has occurred from CRAO usually is permanent.

Central retinal vein occlusion (CRVO) causes sudden, painless vision loss that can be mild to severe. Most people will have high blood pressure, chronic open-angle glaucoma and/or significant hardening of the arteries.

A university study in the United States found:

The study authors concluded that high blood pressure and vascular diseases are important risk factors for central retinal vein occlusion, and that blacks have a significantly greater risk for CRVO than people of other races.

Also, people with diabetes and end-organ damage (diabetic retinopathy, for example) are at increased risk for CRVO, while those with uncomplicated diabetes are not.

When CRVO occurs, your eye care professional will see signs of decreased blood flow from the retina during your comprehensive eye exam.

Two basic classes of CRVO are:

The prognosis for non-ischemic CRVO is good. But the ischemic type almost always has vision of 20/100 or worse at first, with a much higher risk of developing complications.

CRVO complications can include abnormal blood vessel growth (neovascularization) in the retina that may cause bleeding inside the eye and glaucoma that fails to respond to conventional therapy.

Injection of corticosteroids and other medications inside the eye may help reduce vision loss in people with CRVO.

If you have sudden vision loss or any other symptoms of CRVO or other eye stroke, see an eye care professional immediately.

A branch retinal artery occlusion usually occurs suddenly. While typically painless, a BRAO can cause an abrupt loss of peripheral vision. In some cases, you may also lose central vision.

Usually the cause is a clot or plaque (embolus) that breaks loose from the carotid artery in the neck or from one of the valves or chambers in the heart.

Loss of visual acuity with a BRAO will depend mostly on whether arterial blood flow has been significantly disrupted or if swelling is present in the macula, which is the most sensitive part of the retina.

Most people with BRAO have narrowing of the carotid or neck artery, high blood pressure, cholesterol disorders, cardiac disease or combinations of these disorders.

Most people who have branch retinal artery occlusion will recover visual acuity of 20/40 or better, but many will have noticeable and permanent vision problems such as blind spots or distortions.

Bleeding in the eye and glaucoma are other complications of BRAO eye strokes.

People who have a branch retinal vein occlusion also may have decreased vision, peripheral vision loss, distorted vision or blind spots. A BRVO involves only one eye and usually develops in a person with high blood pressure or diabetes.

The cause of BRVO is a blood clot (thrombus) that develops in a branch retinal vein due to hardening of the arteries (arteriosclerosis) in an adjacent retinal artery.

Your eye care professional will see bleeding along the involved retinal vein in a clear pattern that nearly always leads to the correct diagnosis. 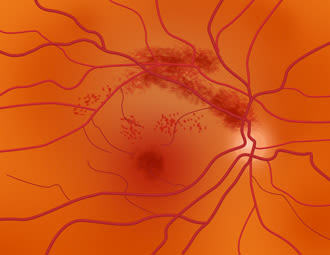 A branch retinal vein occlusion (BRVO) can develop from a blood clot.

BRVO patients are typically re-evaluated every one to two months to determine if chronic macular swelling (edema) and/or neovascularization are present. If macular edema persists beyond three to six months and visual acuity is reduced below 20/40, laser treatment may be recommended.

In such cases, laser treatment has been shown to improve vision and increase your chances that final visual acuity will be 20/40 or better.

For many people, retinal bleeding and macular swelling from a BRVO eye stroke will end in a few months, with retention of good vision.

For edema (swelling) of the macula caused by BRVO, injections of medication into the eye may be recommended. Consult with your eye care professional about the latest medical treatments for BRVO and other eye strokes.