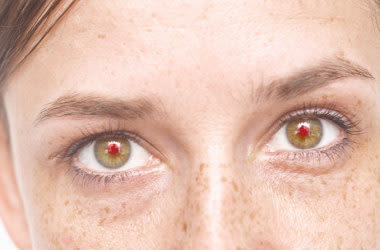 Tired of photographs being ruined because the eyes of someone in the photo appear bright red? This article answers common questions about this “red-eye effect,” and what you can do to avoid it.

Light rays travel through the cornea and pupil of the eye to focus on the retina (the layer of light-detecting cells at the back of the eye).

When a camera flash goes off, the pupils of your subject's eyes don't have time to constrict to reduce the amount of light entering their eyes. Therefore, a large burst of light reaches the retina, reflects back, and is captured in the image.

The red colour is due to the rich blood supply of the choroid, a layer of connective tissue at the back of the eye that nourishes the retina and gives it its normal red colour. 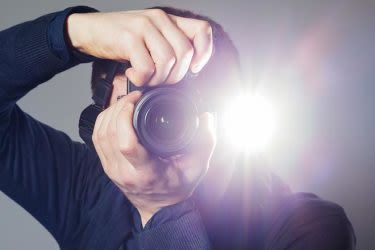 Don't look directly at the camera

Tell your subjects to look slightly away from the lens, so their eyes won't catch the flash at a direct angle. This will reduce the likelihood of red eyes in pictures.

The darker the environment, the more dilated the subject's pupils become, which increases the likelihood of red-eye effects in photos. Increasing ambient light levels can help eliminate red eyes.

Most modern cameras have this feature, which emits short flashes of light in quick succession before the camera actually takes the picture. These light flashes constrict your subject’s pupils, reducing how much light reflects back from the retina.

Use an external flash

This method doesn't work for cameras with built-in flashes, but if you have a camera that supports the use of an external flash, moving the flash unit farther away from the camera lens will prevent light from reflecting directly back into the lens and eliminate the red eye problem.

Make sure your subjects aren't drunk!

Too much alcohol slows reaction time but did you know it also affects the response time of your pupils? Red eyes occur more often in photographs if your subject is intoxicated, because their pupils won't constrict fast enough to reduce the amount of light that reflects back from the retina.

If you are using a digital camera, you can upload the photos to your computer and then edit out the offending red eyes with the "red eye removal tool" in a picture-editing program. Some applications have a "drag and drop" feature where you can pick up a colour from the iris of the eye and place it over the parts of the eyes appearing red; other programs automatically correct the offending red eye for you.

Apps are available for your smartphone (all types) that allow you to fix red eyes in photos. Basically, if a face is detected in a photo and there's red eye, you can use an auto-enhance tool to remove the redness and make the subject's eyes appear more natural. Also, most image-editing apps have a tool that allows you to manually fix red eye problems in smartphone photos.

If you've developed your camera film and notice red eyes in a photograph, you can remove the effect a special red-eye remover pen. You also can scan the photo to your computer and use a photo-editing program to remove the red-eye effect.

Rarely, red eye in only one eye may indicate an eye disease such as a tumour or cataract. Another possibility is strabismus, which is a misalignment of the eyes.

If you or a family member consistently have only one eye that appears red in photos, consult your optometrist.

It’s possible you have pupils that are relatively large in size. Large pupils, are more likely to mean red eyes in pictures. Even with large pupils, however, avoiding looking directly at the camera will reduce the likelihood your eyes will appear red in photos.

A white or yellowish glow, called leukocoria, in one eye could signal a serious eye condition or disease, including cataract, Coats' disease, eye infection or retinal detachment.

A white or yellow reflex (eye shine) could also be a warning sign of a rare but serious childhood cancer called retinoblastoma.

If you notice anything unusual about your child's eyes in photos, consult an optometrist immediately.

Why do my dog's eyes shine different colours in photos?

White, yellow or green glow reflecting from the eyes of dogs, cats, kangaroos and other animals is caused by a structure in the back of these animals’ eyes called the tapetum lucidum.

The tapetum lucidum is a special reflective layer in the back of many animals' eyes that helps to increase exposure to light of the retinal cells in low light which helps give these animals excellent night vision. When light reflects from this layer, it causes the pupils of these animals to glow in a variety of colours.