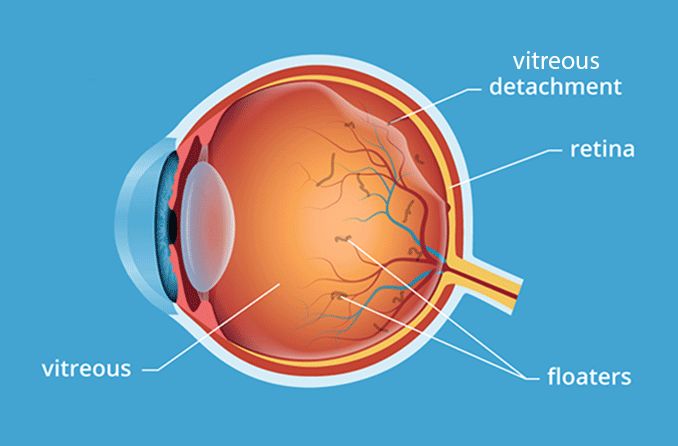 At birth and throughout childhood, the vitreous has a gel-like consistency but as we age, the vitreous begins to dissolve and liquefy to create a watery centre.

Some undissolved gel particles occasionally will float around in the more liquid centre of the vitreous. These particles can take on many shapes and sizes to become what we refer to as "eye floaters."

You'll notice that these spots and floaters are particularly pronounced if you gaze at a clear or overcast sky or a computer screen with a white or light-coloured background. You won't actually be able to see tiny bits of debris floating loose within your eye. Instead, shadows from these floaters are cast on the retina as light passes through the eye, and those tiny shadows are what you see.

Noticing a few floaters from time to time is not a cause for concern. However, if you see a shower of floaters and spots, especially if they are accompanied by flashes of light, you should seek medical attention immediately from your optometrist or ophthalmologist.

Alternatively it could mean that the retina itself is becoming dislodged from the back of the eye's inner lining, which contains blood, nutrients and oxygen vital to healthy function. As the vitreous gel tugs on the delicate retina, it might cause a small tear or hole in it. When the retina is torn, vitreous can enter the opening and push the retina farther away from the inner lining of the back of the eye — leading to a retinal detachment.

Vitreous detachments with accompanying eye floaters may also occur in circumstances such as:

When you are shor-tsighted, your eye's elongated shape also can increase the likelihood of a PVD and accompanying traction on the retina. Short-sighted people also are more likely to have PVDs at a younger age.

Months or even years after cataract surgery, it's not unusual for the thin membrane (or "capsule") that's left intact behind the interocular lens (IOL) to become cloudy, affecting vision. This delayed cataract surgery complication is called posterior capsular opacification (PCO).

In the capsulotomy procedure used to treat PCO, a special type of laser focuses energy onto the cloudy capsule, vaporising the central portion of it to create a clear path for light to reach the retina, which restores clear vision.

However, the risks of a virectomy usually outweigh the benefits for eye floater treatment. These risks include surgically induced retinal detachment and serious eye infections. On rare occasions, vitrectomy surgery can cause new or even more floaters. For these reasons, most eye surgeons do not recommend vitrectomy to treat eye floaters and spots.

A relatively new laser procedure called laser vitreolysis has been introduced that is a much safer alternative to vitrectomy for treating floaters.

In this in-office procedure, a laser beam is projected into the eye through the pupil and is focused on large floaters, which breaks them apart and/or frequently vaporises them so they disappear or become much less bothersome.

To determine if you can benefit from laser vitreolysis to get rid of floaters, your optometrist will consider several factors, including your age, how quickly your symptoms started, what your floaters look like and where they are located.

An ophthalmologist who performs laser vitreolysis also will evaluate the shape and borders of your eye floaters. Those with "soft" borders often can be treated successfully. Likewise, sizable floaters that appear suddenly as a result of a posterior vitreous detachment often can be successfully treated with the laser procedure.

Laser vitreolysis usually is pain-free and can be performed in an eye surgeon’s office. Just prior to the treatment, anesthetic eye drops are applied, and a special type of device (a gonioscope) is placed on your eye. Then, the surgeon will look through a medical microscope (a slit lamp) and deliver the laser energy to the floaters being treated.

At the end of the procedure, the gonio lens is removed, your eye is rinsed with saline and the surgeon will apply an anti-inflammatory eye drop. Additional eye drops may be prescribed for you to use at home.

If you are bothered by large, persistent eye floaters, ask your optometrist if laser vitreolysis might be a good treatment option for you.

Remember, a sudden appearance of a significant number of eye floaters, especially if they are accompanied by flashes of light or other vision disturbances, could indicate a detached retina or other serious problem in the eye. If you suddenly see new floaters, see your optometrist immediately or go to your nearest eye hospital without delay.