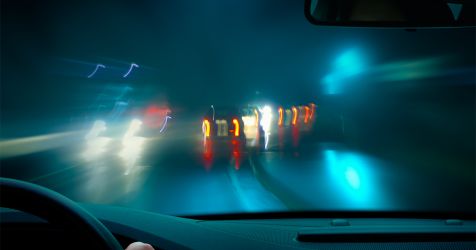 Night blindness, or nyctalopia, can be a serious traffic hazard, particularly among older motorists who drive after dark.

Difficulty driving at night can be caused by a dietary imbalance, an eye condition or a chronic eye disease.

The problem is compounded because a significant number of older drivers with age-related vision problems may not visit an optometrist frequently enough to make sure they can see well enough to drive safely.

To make matters worse, eye problems such as cataracts can develop so slowly that older drivers may be unaware that their vision is declining.

Also, as we age, we experience declines in vision, cognition and motor function as part of the ageing process.

Why is ageing a problem for night driving?

A number of changes occur in the eye that can affect night driving vision, including:

Ironically, high beams, auxiliary lights and fog lights designed to help you see better at night can put you at risk for an accident due to the glare you may experience when oncoming vehicles have these features.

Finally, some motorists who have undergone laser vision correction such as LASIK may experience increased glare from oncoming headlights due to corneal higher-order aberrations caused by their surgery.

The only way to make sure your vision is acceptable for driving at night as you get older is to schedule a comprehensive annual eye exam with an optometrist near you.

How to boost your diet to protect ageing eyes