Bifocal and trifocal lenses: Still good options for vision after 40 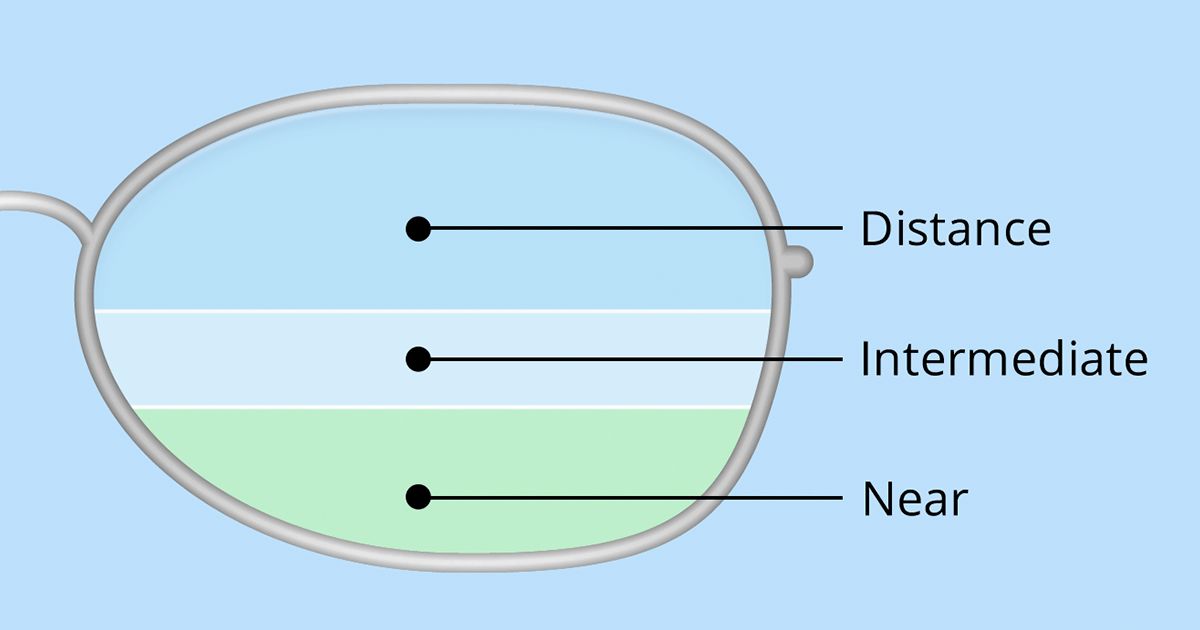 Bifocals and trifocals have been around for many years to help people over age 40 deal with the normal age-related loss of near vision called presbyopia.

Bifocal and trifocal lenses contain two lens powers (bifocals) or three (trifocals) to help restore a fuller range of vision and, in particular, to restore reading vision lost to presbyopia.

Though bifocals and trifocals have visible lines — called "seg" lines because they outline the segment(s) of the lenses that are devoted to correcting near vision — these multifocal lenses are preferred by some wearers because they provide wider viewing zones for computer use and reading than many line-free progressive lenses.

For the greatest clarity and comfort with bifocals and trifocals, have anti-reflective coating applied to the lenses. This coating eliminates distracting reflections and provides better vision in low-light conditions, such as when driving at night.

AR coating also makes the seg lines in bifocals and trifocal less visible by eliminating reflections from these lines.

Another beneficial option is photochromic lens technology, which enables the lenses to automatically darken in response to sunlight.

History of bifocals and trifocals

Benjamin Franklin, the early American statesman and inventor, is credited with creating the first multifocal lens for eyeglasses.

Prior to Franklin's invention, anyone with presbyopia had to carry two pairs of eyeglasses — one for seeing distant objects and one for seeing up close. 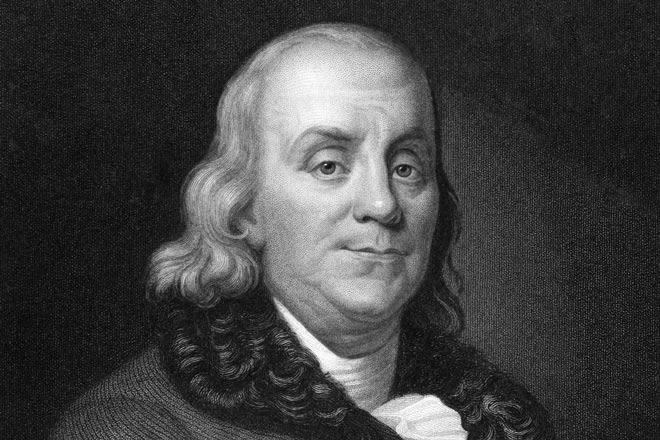 Around 1784, Franklin cut two lenses in half — one with a distance correction and one with a correction for reading — and glued them together. This early bifocal design, with a line extending across the entire width of the lens separating the distance and near corrections, became known as the Franklin bifocal. (It is now also called an Executive bifocal.)

Later, in the nineteenth and early twentieth century, the Franklin bifocal lens design was further refined. Smaller, round bifocal segments (or "segs") for near vision were developed, and techniques were invented to fuse the near seg into the lens containing the distance correction.

As we continue to age, presbyopia ultimately affects intermediate (arm's length) vision as well. By age 50, bifocals may enable a person to see clearly across the room and up close, but vision at arm's length — the range needed to clearly see a desktop or laptop computer screen, for example — may remain blurry.

Around the 1940's, trifocals were invented to solve this problem.

Trifocals feature a second small lens segment placed directly above the near segment, for a total of three power zones.

Typically, the intermediate seg of a trifocal lens contains 50 percent of the added magnification of the near segment and restores clear vision for arm's length tasks such as computer work, reading a newspaper and seeing a car dashboard clearly.

Today, you can select from many bifocal and trifocal lens designs, depending on your age and visual needs.

There are even special bifocals and trifocals designed for glasses for computer work and other tasks that take place at the intermediate range.

In the following images, distance describes the area of the lens used for far vision, intermediate for arm's length and near for reading vision (about 16 inches away).

As their name suggests, bifocal eyeglass lenses have two lens powers — one for distance and one for near. 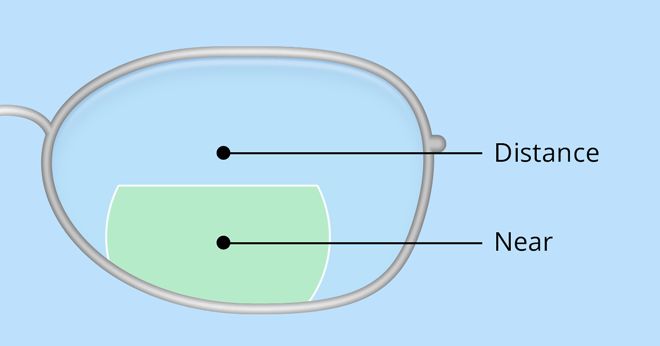 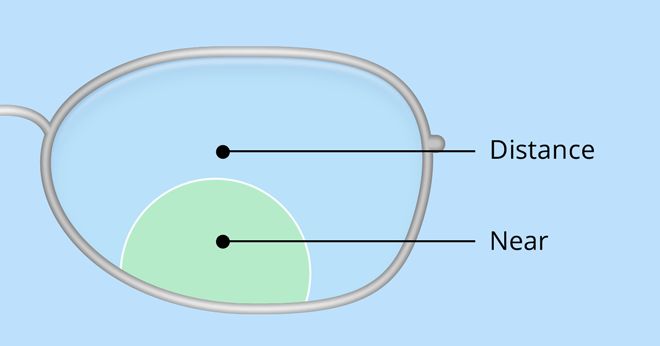 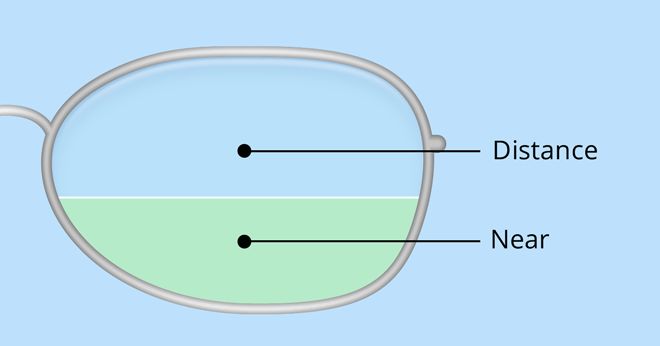 The lower half of a bifocal lens contains the near segment for reading and other close-up tasks. The rest of the lens is usually a distance correction, but sometimes has no correction at all in it, if you have good distance vision.

The Franklin bifocal design remained in style for more than a century. Then in the early 1900s, the invention of fused bifocals offered thinner and more attractive lenses. In a fused bifocal, a small lens segment for near vision is attached (fused) to a full distance lens.

The most popular fused bifocal today has a D-shaped near segment rotated 90 degrees so that the flat part of the "D" is facing up. For this reason, D-seg bifocals also are called "flat-top" (FT).

Flat-top bifocals are further described by the width of the near segment, measured in millimetres (mm). The most popular FT bifocal is the FT-28 — a flat-top bifocal with a near seg that is 28 mm wide.

While bifocals work great for tasks like driving and reading, they are limited in their ability to provide clear vision at points in between, such as the distance to a computer monitor.

Trifocal eyeglass lenses have an additional ribbon-shaped lens segment immediately above the near seg for seeing objects in the intermediate zone of vision — approximately 45cm to 60cm away. 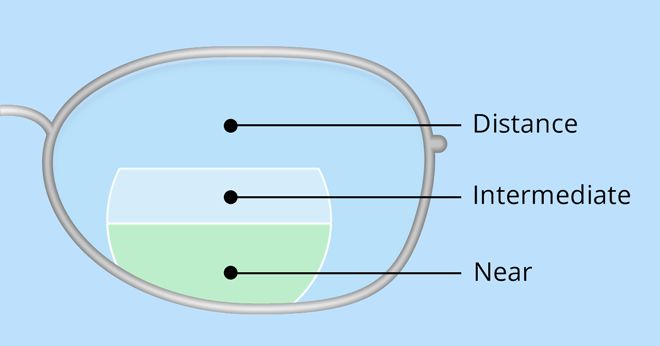 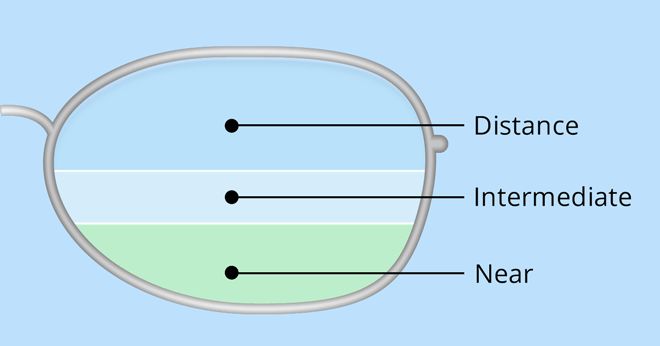 This intermediate segment provides 50 percent of the added magnifying power of the near seg, making it perfect for computer use and for seeing your speedometer and other dashboard gauges when driving.

Trifocals are especially helpful for presbyopes over age 50, who have less depth of focus than younger presbyopes, who may still be able to see objects at arm's length reasonably well through the top part of their bifocals.

As with bifocals, the most popular trifocals have a flat-top (FT) design, with the near and intermediate segments being 28 mm wide.

Some people are reluctant to try trifocals because they are concerned about the appearance of the lenses or are worried that trifocals will be difficult to get used to, since the top line of the intermediate zone is close to the centre of the lens.

But in fact, most people who try trifocals are very pleased with the added range of vision they provide (compared with bifocals) and the wide field of view they offer for computer use.

Although most bifocals and trifocals have visible lines at the border of lens segments, there is a blended round-seg bifocal that has a less noticeable near segment than its regular round-seg cousin.

The near seg is blended into the distance portion of the lens so that it is virtually invisible. 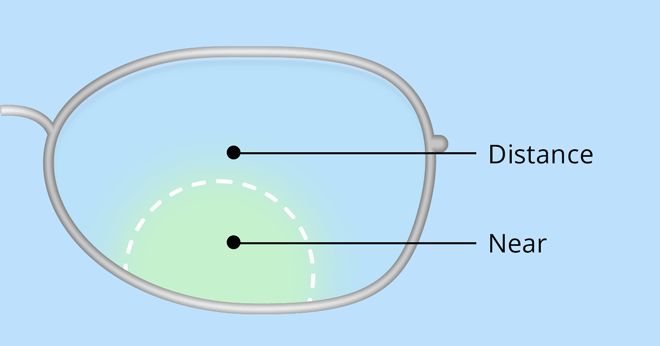 With no visible lines, a blended round seg bifocal offers a more youthful appearance than lined bifocals and trifocals.

But a drawback of the blended bifocal is that the optics of the lens are slightly distorted at the blended border between distance and near zones. This may be bothersome to some wearers.

Blended bifocals should not be confused with varifocal (progressive lenses), which are special no-line multifocals that incorporate all corrections, from distance to close-up, into one lens without any separation of the various visual zones by lines.

Today, progressive lenses are significantly more popular than bifocals or trifocals, partly because they provide a younger appearance with no age-revealing seg lines.

Fitting guidelines for bifocals and trifocals

Bifocals typically are fitted so the top line of the near segment rests at the same height as the wearer's lower eyelid.

Trifocals are fitted a bit higher, with the top line of the intermediate seg aligned with the lower border of the wearer's pupil.

With these placements, your eyes typically will look through the correct viewing zone of your bifocals or trifocals without a need to tilt your head back or make other postural adjustments.

But during your spectacles fitting, your optician can position your bifocal and trifocal segments higher or lower, based on your individual needs and preferences.

A note about safety

Though bifocals and trifocals provide a wider range of vision than monofocal ("single vision") spectacle lenses, there is one drawback: they make objects at your feet blurry unless you remember to tilt your head down.

This can be a safety issue for some wearers when they are walking down stairways or off pavement curbs.

For this reason, having a second pair of glasses with single vision (distance correction only) lenses for use when negotiating stairs or walking outdoors can lower the risk of falls.

NEED AN EYE TEST? Find an optician near you and schedule an appointment.

Normal age-related vision changes: What are ageing changes in the eye?