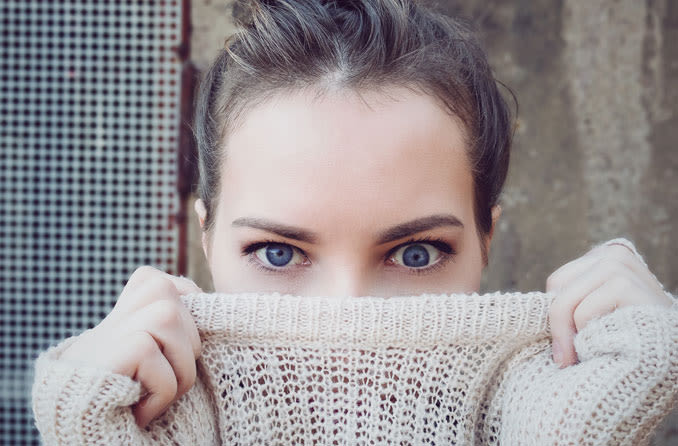 Amblyopia is a vision development disorder in which an eye fails to achieve normal visual acuity, even with prescription eyeglasses or contact lenses.

Also called lazy eye, amblyopia begins during infancy and early childhood. In most cases, only one eye is affected. But in some cases, reduced visual acuity can occur in both eyes.

Particularly if lazy eye is detected early in life and promptly treated, reduced vision can be avoided. But if left untreated, lazy eye can cause severe visual disability in the affected eye.

Because amblyopia typically is a problem of infant vision development, symptoms of the condition can be difficult to discern. 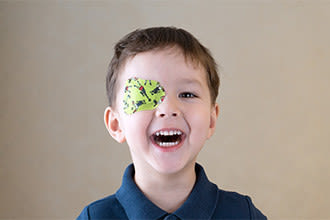 You can help your child accept patching by making it fun.

However, a common cause of amblyopia is strabismus. So if you notice your baby or young child has crossed eyes or some other apparent eye misalignment, visit an optician immediately — preferably one who specialises in children's vision.

You can try this simple screening test at home by simply covering and uncovering your child's eyes (one eye at a time) when he or she is performing a visual task, such as watching television.

If your child is not bothered when one eye is covered, but objects when the other eye is, this may suggest that the eye you have covered is the "good" eye, and that the uncovered eye is amblyopic, causing blurred vision.

But a simple screening test is no substitute for a comprehensive eye exam.

Sometimes, amblyopia is caused by unequal refractive errors in the two eyes, despite perfect eye alignment. For example, one eye may have significant uncorrected short sightedness or long sightedness, while the other eye does not.

Or one eye may have significant astigmatism and the other eye does not.   In such cases, the brain relies on the eye that has less uncorrected refractive error and "tunes out" the blurred vision from the other eye, causing amblyopia in that eye from disuse.

This type of amblyopia is called refractive amblyopia (or anisometropic amblyopia).

Treatment of strabismic amblyopia often involves strabismus surgery to straighten the eyes, followed by eye patching and often some form of vision therapy (also called orthoptics) to help both eyes work together equally as a team.

Though prosthetic lenses are more costly than a simple eye patch and require a contact lens exam and fitting, they can work wonders in difficult cases of amblyopia treatment when compliance with eye patching is poor.

In some children, atropine eye drops have been used to treat amblyopia instead of an eye patch. One drop is placed in your child's good eye each day (your optician will instruct you). Atropine blurs vision in the good eye, which forces your child to use the eye with amblyopia more, to strengthen it.

In one large study of 419 children younger than 7 years of age with amblyopia ranging from 20/40 (6/12) to 20/100 (6/30) prior to treatment, atropine therapy produced comparable results to eye patching (though improvement in visual acuity in the amblyopic eye was slightly greater in the patching group). As a result, some previously sceptical opticians are using atropine as their first choice for amblyopia treatment over patching.

However, atropine does have side effects that should be considered: light sensitivity (because the eye is constantly dilated), flushing and possible paralysis of the ciliary muscle after long-term atropine use, which could affect the eye's accomodation, or ability to change focus.

But it now appears that older children and even adults with long-standing lazy eye can benefit from amblyopia treatment using computer programs that stimulate neural changes leading to improvements in visual acuity and contrast sensitivity.

Computer programs to treat lazy eye also are available and in use by opticians who specialise in children's vision and vision therapy.

In some cases, uncorrected refractive errors and amblyopia in young children can lead to behaviours that seem to indicate developmental or other disorders when the problem is purely visual.